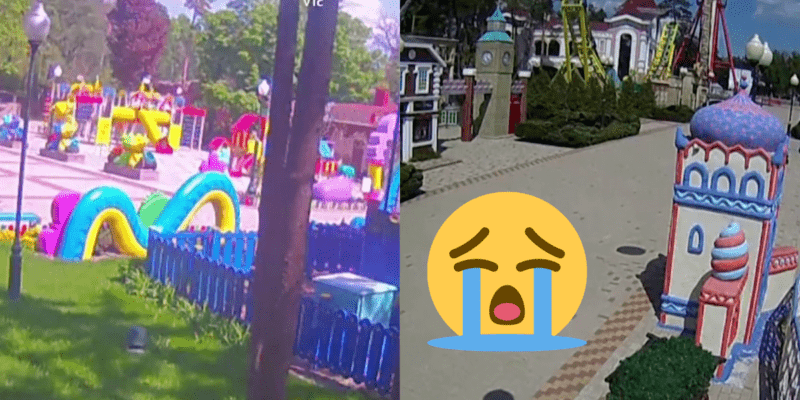 The ongoing Russian and Ukrainian conflict is one of the most documented in global history. Cell phones, news cameras, and even surveillance cameras have broadcasted some of the worst moments for the world to see.

Among them is new footage from ABC News out of Kharkiv, Ukraine, a city with a pre-war population of nearly 1.5 million. According to the AP, it is the most recent victim of brutal attacks and unprecedented death.

A new surveillance video shows the moment Russian rockets hit Maxim Gorky Central Park for Culture and Recreation, a small theme park in Kharkiv. The cameras captured over three minutes of footage at multiple spots in the park.

Related: You Can Walk Around Disney Theme Parks to Support Ukraine

Closed since early on in the war, Gorky Park was empty at the time – video shows rides with tarps over the seats and eerily empty brick roads. Bright yellow rollercoaster tracks and pastel show buildings sit quietly before the camera shakes, a fiery blast fills the screen, and the air is filled with thick, gray dust.

According to a tweet from ABC, no one was killed, and only one person was injured. They wrote:

Dramatic footage captures the moment rockets hit an amusement park in Kharkiv, Ukraine. Fire crews eventually contained the fire and one woman suffered shrapnel wounds from the shelling, according to State Emergency Services.

Fire crews eventually contained the fire and one woman suffered shrapnel wounds from the shelling, according to State Emergency Services. https://t.co/LyPHekQx4v pic.twitter.com/TVbAskD2EH

This latest footage is just another reminder of how the war affects the everyday lives of Ukrainians. A few months ago, Gorky Park would’ve been full of families and children, laughing and enjoying each other’s company. Now, it remains quiet and dusty, a symbol of how quickly life can change.

According to CNN, Ukrainian President Volodymyr Zelenskyy was willing to meet with Russian President Vladimir Putin to end the war as of two weeks ago. But no such meeting has occurred and the destruction continues.

Still, 90% of Americans planned to travel soon amid the ongoing war as of March. Following the COVID-19 pandemic, people have been more eager to travel despite increasing inflation. Several factors are at play: saved stimulus checks, more flexible work-from-home schedules, and the recent removal of mask mandates on public transportation, including airplanes, within the United States.

If you’re planning to travel soon, it’s essential to stay updated on the latest COVID-19 guidelines within the United States and internationally.