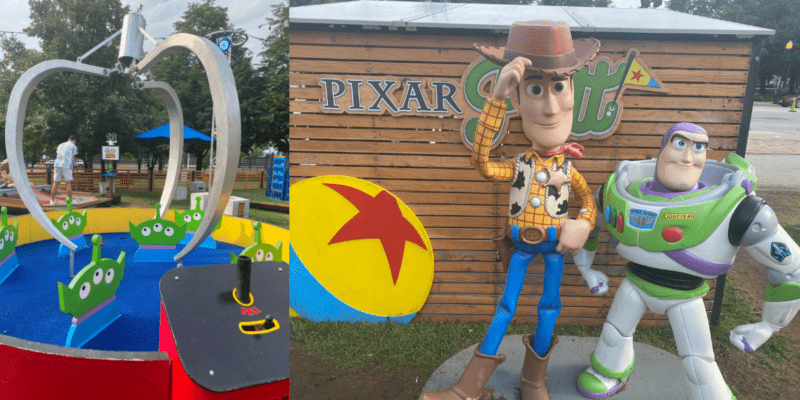 Your favorite Pixar characters are coming to a city near you for a rising round of mini golf!

Pixar Putt first opened in Australia in 2019 and came to the United States last year, kicking off in New York City. Since then, it’s visited San Antonio, Dallas, Los Angeles, Discovery Green in Houston, and other cities across the country. It’s currently at Navy Pier in Chicago, Illinois, until August 21!

The mini-golf tour is a collaboration between Teg Life Like Touring and Rockefeller Productions, which also presents the Winnie The Pooh: The Musical tour. If you’re a fan of Fantasia Gardens and Winter Summerland in Walt Disney World Resort, this experience is for you.

I went to Pixar Putt on Sunday, August 7, with a tee-off time of 5:00 p.m. Our tickets cost $33 per adult. We didn’t have any children with us, but child tickets at the same time would’ve cost $28. Weekday tickets are priced at $31 and $26, with the option to purchase a 4-ticket Family Pack for $99 – only for two adults and two children.

24 hours before we arrived, I received an e-mail telling me not to arrive early. Instead, Guests have a 30-minute arrival window after their tee-off time. Pixar Putt doesn’t offer refunds. They stagger entry to avoid crowding, so Guests should prepare to wait a bit when they arrive.

It was a rainy day but thankfully cleared up before we arrived. It did present one problem – mud. It was muddy before we even entered the course. Presumably, for easier transportation, each hole is on an elevated green turf platform, but the ground itself is left uncovered. It would’ve been nice to have some turf under the holes to prevent that.

We got our golf balls, clubs, and a scoring card and headed onto the course. It wasn’t too busy, so we started right away – but to get more people through, they had us start at holes 10-18, then head to 1-9. Because hole 18 is the most impressive, with an employee raising Carl’s house from Up (2009) to release our golf balls over Paradise falls, hole 9 was somewhat of an anticlimactic ending.

We enjoyed all of the mini-golf holes, especially the ones with a twist on your classic mini-golf course. In this Incredibles (2004) themed section, there are four holes, and each Guest must get their golf ball into a different hole to defeat the Omnidroid:

Unfortunately, many of the props showed wear from months outdoors, and I’m not sure how frequently they’re repaired or cleaned. Some of the iconic Pixar ball-shaped turf pieces that indicated where to tee off from were replaced by stickers or missing altogether.

Another hole, themed after Toy Story (1995), features the iconic claw with Aliens waiting underneath. Instead of putting your golf ball, you aim the claw with a joystick and drop it in to try for a hole-in-one:

Pixar Putt also offers an “After Dark” experience, perfect for couples and groups of friends hoping for an adults-only round of minigolf. Though it will naturally vary by location, Navy Pier offers a gorgeous view of Chicago after dark.

Overall, we were happy with our experience. If the ground was protected, the paint had been a little fresher, and the sets as clean as they appear on the website, I think it would’ve been worth the $33. But if you love the Disney Parks experience, you may be a bit disappointed at the maintenance of the minigolf course.

On September 3, Pixar Putt will open in Denver, Colorado! If you’d like to experience Pixar Putt in your city, keep an eye on social media and the official tour website for future cities and dates.

Would you pay $33 to attend Pixar Putt?