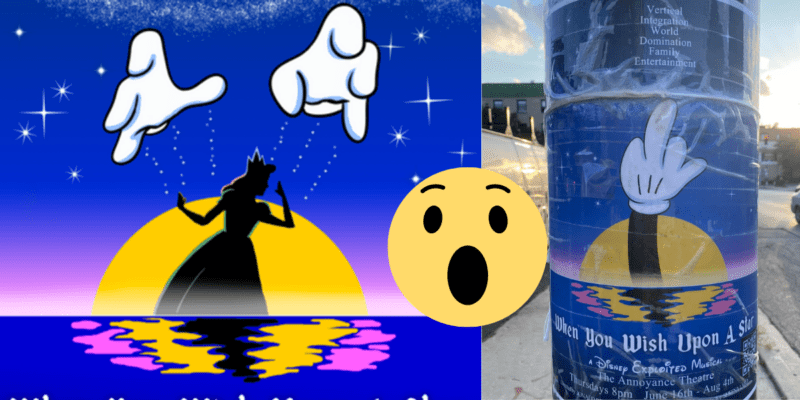 The Walt Disney Company is easily one of the most powerful in the world – owning numerous media networks like ABC, FOX, ESPN, and more. In 2022, TIME named Disney one of the 100 Most Influential Companies.

Disney has been called an “entertainment empire” and “the world’s most powerful brand.” In March, CEO Bob Chapek called The Walt Disney Company the “most powerful force.”

This summer, a musical theatre group is highlighting The Walt Disney Company’s influence in a new way. The Annoyance Theatre, located in Chicago, Illinois, has been a pinnacle of the comedy scene for 33 years.

Through August 4, “When You Wish Upon A Star: A Disney Exploited Musical” is playing every Thursday at 8 p.m. at The Annoyance Theatre.

Related: Hilarious ‘Be Our Guest’ Parody Reminds Everyone to ‘Wear a Mask’

With a book by Zach Hacker and Hailey Reeves and music by Stuart Mott, the musical boasts a simple tagline:

One poster features Mickey Mouse’s gloved hand giving the middle finger, while another shows two gloves ominously reaching for a silhouette of a princess.

The theatre describes the musical simply as:

“A hilarious musical take down of the House of Mouse.”

Of course, this isn’t the first musical Disney parody. Not even the first in Chicago! Team Starkid- a musical theatre group known for their YouTube sensation, “A Very Potter Musical”- performed “Twisted: The Untold Story of A Royal Vizier” at Chicago’s Greenhouse Theatre Center in 2013. The Aladdin (1992) parody now has nearly 7,000,000 views on YouTube.

Related: ‘Thor: Love and Thunder’ Becomes A ‘Star Wars’ Parody For One Scene

Fans have even parodied Disney Park attractions – like this one using Home Depot to parody EPCOT’s Soarin’ Around the World. Others rewrote Disney music to cope with the ongoing COVID-19 pandemic.

What’s your favorite Disney parody? Let us know in the comments.