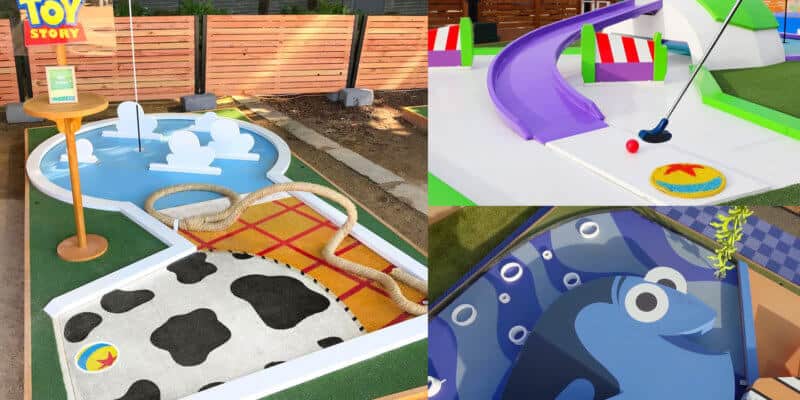 Are you a fan of mini-golf and Pixar? Then this pop-up mini-golf course may be a dream come true as each of its 18 holes are themed after Pixar’s biggest blockbuster hits!

Pixar Putt is Australia’s newest pop-up mini-golf course that’s sure to capture the child in all us as it offers guests a 9- or 18-hole mini-golf experience that is truly to infinity…and beyond! As pictured below, Disney/Pixar’s “Toy Story” characters of Woody and Buzz are major players at the course. However, they are only two of the many Pixar characters/scenes found at the pop-up.

Some of major Disney/Pixar movies themed after the holes include “The Incredibles”, “Finding Nemo”, “A Bug’s Life”, “Ratatouille”, “Monsters, Inc.”, “Wall-E”, “Inside Out”, “Coco”, “The Good Dinosaur” and more. For all the people out there who think this experience is for kids–think again! This experience is for all ages, including adults who are a child at heart.

With all this Disney/Pixar theming–you probably assume there are live characters to go with the event. Sadly, you’ll have to save these types of photo ops for the Disney Parks. However, this pop-up course does feature a photo opportunity with Buzz Lightyear and Sheriff Woody as you enter.

As much as you’ll probably want too, you can’t take this experience home with you. But, Pixar Putt does offer a range of exclusive merchandise that can only be found at the pop-up.

Currently, Pixar Putt seems to only exist in Australia as the pop-up has now toured several parts of the country. Although, as we know with many Disney/Pixar films–the impossible isn’t always impossible. But for right now, if you are in Australia, the pop-up will be coming to The Plaza at the RAC Arena in Perth, Western Australia on Friday, September 27th for a limited run until Sunday, November 3rd.

Another photo from the #pixarputt activation in King George Square. This event received lots of love from Instagram influencers with their themed putt putt holes and kind, amazing staff. #eventphotography #visualjournalism

Here are some more images of the Pixar pop-up:

For more information, be sure to visit the official website.

What are your thoughts on this Disney/Pixar-themed mini-golf pop-up experience? Let us know in the comments!

Comments Off on Pixar pop-up takes mini golf to infinity and beyond!