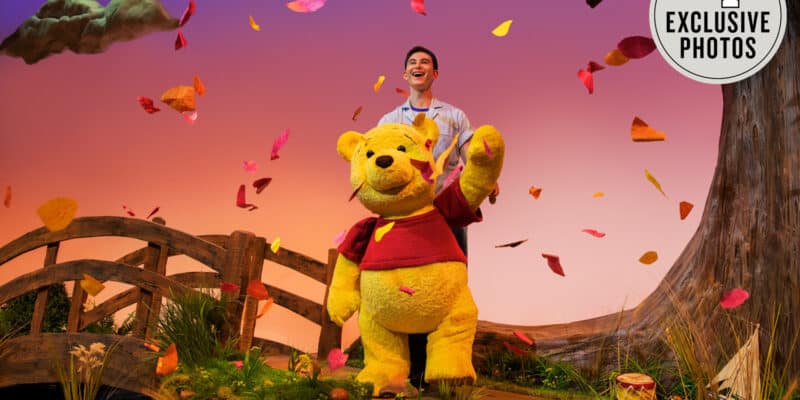 It has been known for a while now that Winnie the Pooh and his friends from the Hundred Acre Wood would be starring in an off-Broadway musical. Announced earlier this year, the production is slated to open on October 21, 2021

Lucky for us, we have a first look at the production thanks to PEOPLE Magazine that will give us a sneak peek into what the musical may entail!

The Winnie the Pooh production will follow the classic story by author A.A. Milne and will include all-time favorite songs such as “Winnie the Pooh” and “The Wonderful Thing About Tiggers”. The production, created by Jonathan Rockefeller with help from Disney Theatrical Productions, is described on the official website winniethepoohshow.com as:

Featuring the Sherman Brother’s classic Grammy-award winning music with further songs by A.A. Milne, this beautiful fresh stage adaptation is told with stunning life-sized puppetry through the eyes of the characters we all know and love, in a new story from the Hundred Acre Wood.

Of course, Pooh and his friends will be puppets but are going to be brought to life by their puppeteers who will be exposed for this production. The puppet costumes will make it look like the characters are actually walking and naturally moving around.

A serene Hundred Acre Wood evening is set as the background for the production that uses a simple set design of things you would find while walking through a forest, such as trees, rock formations, bridges, and shrubs.

Winnie the Pooh is the first Disney musical to premiere off-Broadway, and it is also the first new Disney musical to be produced since Frozen. Fans of all ages will surely appreciate seeing some of their favorite Disney characters back on stage again.

Will you be attending the Winnie The Pooh musical? Let us know in the comments!

Comments Off on Sneak Peek of ‘Winnie the Pooh’ Musical With PHOTOS!