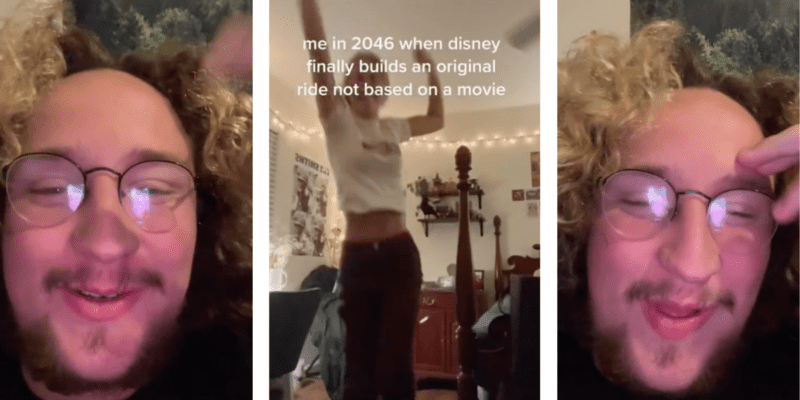 In 2024, Splash Mountain at Disneyland Resort and Walt Disney World Resort will reopen as Tiana’s Bayou Adventure. Guests will be transported to New Orleans and see what their favorite Princess and the Frog (2009) characters are up to after the film.

This change is controversial among Disney fans– the ride is inspired by Uncle Remus’s stories in Song of the South (1946), a widely-banned film for its racist caricature of slavery. Splash Mountain opened in 1989 at Disneyland Park’s Critter Country and in 1992 at Frontierland in Walt Disney World’s Magic Kingdom and is a fan-favorite attraction despite the film’s history.

TikToker Spence, @common_spence, says he doesn’t understand why people would go to Disney looking for rides not based on Disney films. He stitched a video where a person danced happily with the caption, “me in 2046 when Disney finally builds an original ride not based on a movie:”

“Out here in the Midwest, it isn’t so much Disney discourse, but more like Six Flags discourse…” Spence explains. “Whenever Six Flags announces a new ride based on one of the Looney Tunes or DC characters, everyone loses their s**t and gets so mad, and I don’t know why.”

“I always thought that the rides themed based on movies and characters were like the best,” Spence says. He mentions that classic Disney rides, such as Peter Pan’s Flight, Snow White’s Enchanted Wish, and Mad Tea Party, are all based on Disney films.

“Like, you’re going to Disney. Do you not want Disney there? Do you just want the Disney things to be on the f**king stupid s**t you buy? Like I don’t understand,” Spence says. “I always loved themed rides and s**t. I don’t know. Maybe I’m just weird.”

If you’re looking to experience Splash Mountain before it is rethemed after Princess Tiana, you’re in luck – Disney hasn’t announced an official closing date for the attraction at Disneyland or Walt Disney World’s Magic Kingdom. From Disney:

Do you prefer original storylines or Disney Park rides based on Disney movies?