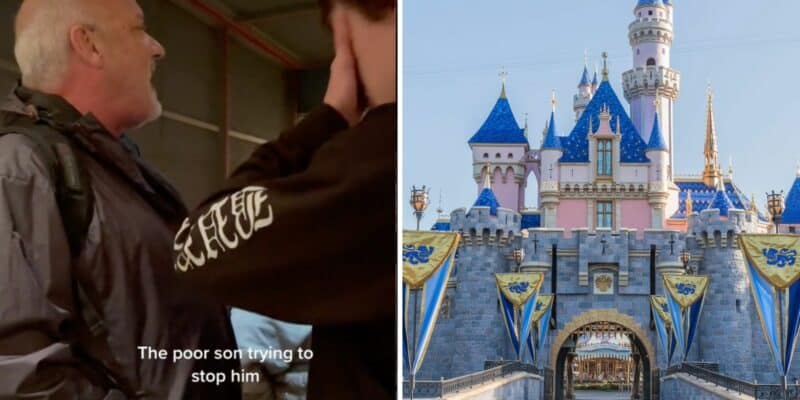 Recent reports suggest that tensions are high in the Parks as of late, with yet another fight taking place in a Disneyland queue, this time at the hands of a “Male Karen”. From smashed electronics to unprompted attacks to all-out brawls, Cast Members and Guests alike have found themselves in the center of de-escalation measures on multiple occasions over the course of just a few months.

In a recent video recorded in Disneyland’s Soarin’ queue and posted on social media, one young Guest found himself diffusing the drama between two grown men, one of whom was his own father.

The argument began when a Guest made his way through the queue to join his family, who was waiting just in front of the father-son duo. From the clip’s caption, it appears that the Guest had to use the restroom and told his family to go ahead and that he’d meet them in line.

This didn’t sit well with the “Male Karen,” a name affectionately given by the surrounding Guests who witnessed the exchange. “Karen” is of course a slang term for someone who is perceived as obnoxious, angry, or entitled, often causing a scene in public just as this Guest did.

The “Male Karen” began badgering the Guests in front of him, insisting that they should have waited for their entire party to be present before entering the queue. His son immediately attempted to stop him.

“I had to go to the bathroom and we waited to get in line,” the “Male Karen” said. The Guest in front of them responded that he must be a better person than they are, seemingly confused with the man’s rigidity.

The “Male Karen” continued to plead his case, insisting that the Guests in front of them simply needed to wait for everyone to be ready and get in line as a group, rather than letting stragglers join them later on.

“Your privilege is showing,” replied the Guest in front, showing no interest in continuing their debate while being asked repeatedly to get in the back of the line.

The clip ends with the “Male Karen’s” son talking over him, begging him to stop.

Over a thousand commenters condemned the “Male Karen” for his inflexibility, and commended the young son for his mature response.

“If you’re the son and you see this, you handled this so well and I’m so sorry you had to be put in this situation,” user Desi Ayala wrote. “You’re a good man!”

Many responses noted the pain in the boy’s face as he pleaded with his dad, expressing sympathy for his ruined experience after having to emotionally check his own father.

“I’ve held the line for someone who was solo, they had a bathroom emergency,” Claudia P added. “It’s just being a decent human. It happens to us all.”

The unfortunate incident can be viewed in the video below, or by clicking here.

As a reminder, Disney reserves the right to “prohibit any activity that they determine may be harmful or disruptive in their sole and absolute discretion,” as written in their Park Rules and Regulations.

Do you think it’s permissible to save a spot in the queue for a group member? Tell us your opinion in the comments below.