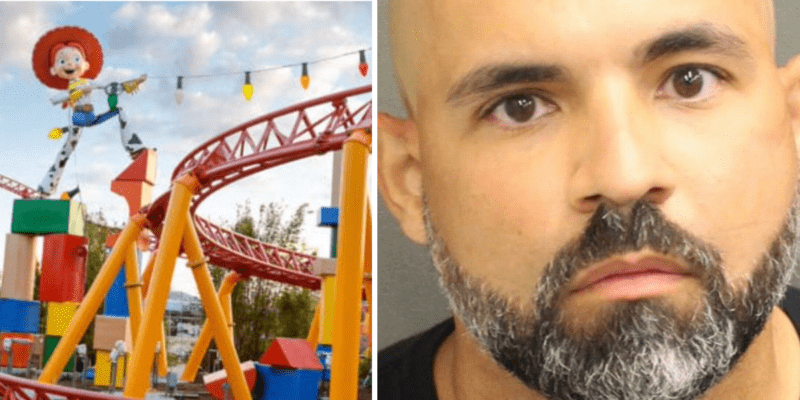 Yet another Disney World fight has occurred, this time resulting in the arrest of a man who says he has brain cancer.

There have been several fights breaking out at both Walt Disney World Resort and Disneyland Resort over the course of the last few months. Perhaps the most notable happened earlier this summer when a massive brawl between families at Magic Kingdom in the shadow of Cinderella Castle resulted in arrests and multiple hospitalizations.

Another brawl that was caught on video saw two Disney Park Guests at Disneyland fight in the midst of the popular nighttime spectacular Fantasmic!

Now, we have another Disney World fight to report.

Ramon Aponte Jr, 41, was arrested by the Orange County Police Department after allegedly attacking two teenagers who jumped in front of him in line while waiting to ride Toy Story Mania at Disney’s Hollywood Studios. The incident occurred earlier this summer.

According to the report, the pair continued to heckle Aponte Jr. from further up the line, leading to shoving, and eventually, a punch was thrown before he ordered them to back up as he had brain cancer. Once they got up to the front of the line and a Disney Cast Member asked how many, the two teenagers said “Two.” That’s when Aponte Jr. replied “Two a**holes.”

The name-calling prompted more fighting and the three were kicked out of the line. However, the fighting continued and rose to violence outside of the attraction. One of the teenagers was shoved into a pole, forcing him to fall forward and complained of a “concussion.” He was later taken to the hospital.

Several Disney Cast Members noted that Aponte Jr. was the aggressor and this led to him being arrested.

All three Disney Park Guests were given bans by Walt Disney World Resort.

What do you think of the fights taking place at Disney World? Let us know in the comments.