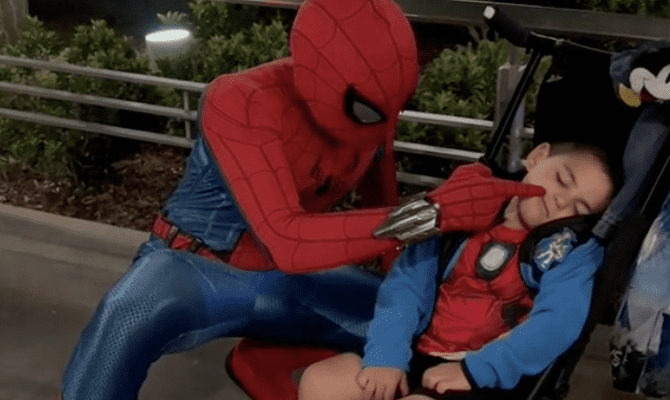 To refuel, Guests can enjoy a menu of epic proportions at the Ant-Man and The Wasp-themed Pym Test Kitchen and Pym Tasting Lab. There’s shopping, there’s Churro spiral Terran Treats, and there’s even a Shawarma Palace, one that surely Tony Stark himself wouldn’t pass up.

Avengers Campus is also home to a long list of Earth’s mightiest heroes, inviting Guests to interact face to face with some of their Marvel Cinematic Universe favorites at the Ancient Sanctum and at Avengers Headquarters.

Avengers Headquarters is defended by regulars such as Black Panther, Iron Man, Black Widow, The Guardians of the Galaxy, Captain Marvel, Thor, Doctor Strange, Ant-Man, The Wasp, Captain America, Shang-Chi, and more, as characters additions continue to coincide with the release of new films.

Sometimes, fans are fortunate enough to catch characters en route to various appearances, like an unsuspecting Guest seen in a recent TikTok video.

In @mftapia’s TikTok video captioned “meeting your hero while sleeping,” the “nicest Spider-man ever” spots a sleeping child in matching Spidey attire and stops for a photo op.

In this unconventional meet and greet, Spider-man signals for nearby Guests to stay quiet as he lifts the kid’s hand for a high five and a fist bump, manipulates the corner of the kid’s mouth into a smile, poses in his infamous crouch with a web-slinging arm extended, maneuvers the kid’s arm into a mirrored salute, and tiptoes away.

The sleeping kid never woke up.

Commenters like Freddy Kingz joked that the child will never nap again as they said “When they show the kid these pics …he will never EVER take a damn nap again! 🤦🏻‍♂️😂” while others said they wished they could have seen the kid’s reaction upon realizing all that went down at the Avengers Campus mid-nap.

“My guy never gonna take a nap once he finds out he missed meeting Spidey,” verified user @ethika wrote.

Chanelle Alyssa added that it’s encounters like these that make them love the Avengers Campus so much.

The gleaming Quinjet that rests high atop the Avengers Headquarters building is bound to attract attention—maybe even some unwanted attention.

As they scan the horizon for potential threats, The Avengers stand poised to greet new recruits—like yourself.

Our heroes are ready to defend the Avengers Headquarters, which would surely lead to an action-packed confrontation on the rooftop and all over the building. You’ll definitely want to be there to see what happens.

Who knows, new recruit, maybe someday you will join the Avengers on their next adventure!

Recruits can train with Black Panther’s loyal bodyguards—the Dora Milaje—to learn wisdom from Wakanda and discover what it’s like to be a member of this elite royal guard.

Heroic encounters await you around every corner within the Avengers Campus.

Have you met any superheroes at Avengers Campus? Tell us your favorite encounter in the comments!