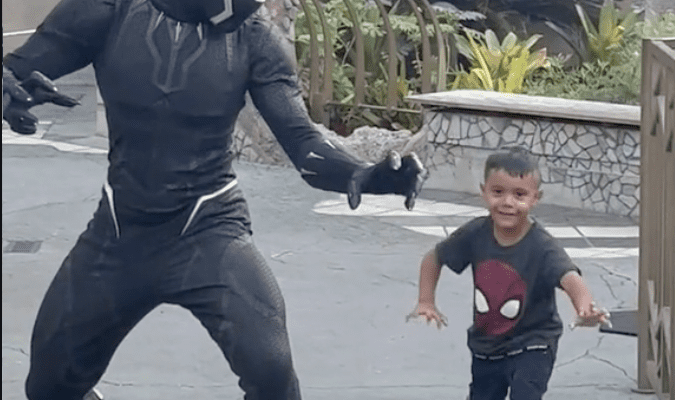 At Avengers Campus in Disney California Adventure Park, Guests have the opportunity to interact with Earth’s mightiest heroes.

Related: Marvel’s Next Avengers Will Be Downfall of Tom Holland’s Spider-Man

One of its attractions, Avengers Headquarters, is defended by superheroes such as Iron Man, Black Panther, Captain Marvel, Black Widow, Thor, Doctor Strange, Ant-Man, The Wasp, The Guardians of the Galaxy, Captain America, Shang-Chi, and more

Some lucky Guests were treated to a heartwarming exchange recently when they encountered Black Panther giving lessons to a young recruit in the middle of a walkway.

TikTok user Francis Dominic posted a video of the interaction.

Avengers Campus in Disneyland continues to be the superior park in the States. Black Panther teaching little kiddos how to be a Black Panther is ICONIQUE! #WakandaForever #Disneyland #AvengeraCampus #Marvel #Disneyparks

Avengers Campus in Disneyland continues to be the superior park in the States. Black Panther teaching little kiddos how to be a Black Panther is ICONIQUE! #WakandaForever #Disneyland #AvengeraCampus #Marvel #Disneyparks

The video is captioned as follows:

Something that’s special about Avengers Campus is that the characters come alive for these little ones. And if you catch The Avengers in a good time, you’ll just see they’re all playing around with the kids and making core memories with them!

The clip shows a crouching Black Panther with his claws extended, and a little boy mimicking his moves step for step. It’s set to the tune of “No Woman No Cry,” which was recently featured in the new Black Panther: Wakanda Forever (2022) trailer.

Related: Cast Honors Chadwick Boseman on ‘Wakanda Forever’ Set ‘He Was With Us‘

The original Black Panther (2018) film marked the debut of what fans deemed was the first black superhero, cementing lead actor Chadwick Boseman in the hearts of millions. Sadly, he passed away from colon cancer before he could reprise his role in the film’s sequel, set to release in November of this year.

Still, his spirit lives on through his fellow Cast Members, both on-screen and off, who continue to inspire Black Panther fans in the theaters and in the Disney Parks.

The official overview of the film reads as follows:

Queen Ramonda (Angela Bassett), Shuri (Letitia Wright), M’Baku (Winston Duke), Okoye (Danai Gurira) and the Dora Milaje (including Florence Kasumba), fight to protect their nation from intervening world powers in the wake of King T’Challa’s death. As the Wakandans strive to embrace their next chapter, the heroes must band together with the help of War Dog Nakia (Lupita Nyong’o) and Everett Ross (Martin Freeman) and forge a new path for the kingdom of Wakanda.

Have you met Black Panther at Avengers Campus? Tell us about it below!