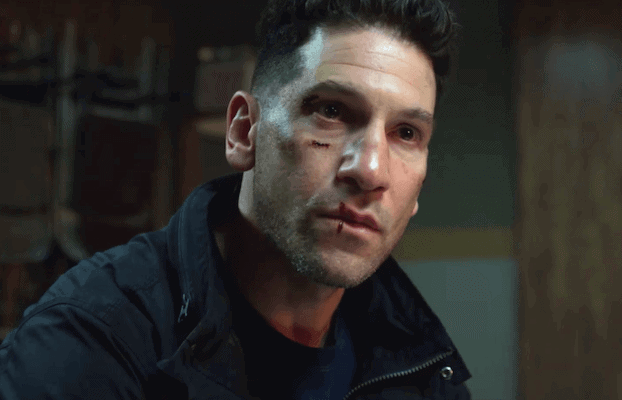 Could we be seeing the Punisher (Jon Bernthal) from Netflix’s eponymous The Punisher (2017) return to the Marvel Cinematic Universe?

The Daredevil (2015) and Luke Cage (2016) star Rosario Dawson said at a panel on Sunday, “[finding] out yesterday” about the Punisher “happening again”:

I hadn’t heard that announcement, but I found out yesterday that the Punisher was happening again. So, I feel like it’s my second chance, because that’s the only one of the shows I wasn’t in and I love Jon Bernthal. So, lets all make it happen collectively guys.

This sounds like it could be quite a bit of a slip up on Rosario Dawson’s part — the question now is whether we might see him in a cameo or supporting role in already-announced Daredevil: Born Again, another MCU property, or even in his own Disney+ series with a new Punisher season?

Who is the Punisher, Frank Castle in Daredevil?

Frank Castle is a former United States veteran and ex-Marine who assumed the name “The Punisher” after the brutal murder of his entire family, including his young daughter.

Seeking revenge, the Punisher hunted down the three New York gangs that he had triangulated as behind the deaths of his family, the Kitchen Irish, the Dogs of Hell, and the Mexican Cartel — brutally eliminating their members.

Soon, he ends up tangling with Daredevil (Charlie Cox), the superhero persona of the blind lawyer Matt Murdock, revealing his true intentions to the protector and Devil of Hell’s Kitchen, before allowing himself to be arrested.

Matt Murdock and Foggy Nelson (Elden Henson), along with paralegal and amateur investigative journalist Karen Page (Deborah Ann Woll) from the legal firm Nelson and Murdock work to defend the Punisher in “The People v. Frank Castle”, eventually failing as Castle winds up in prison where he meets the Kingpin, AKA Wilson Fisk (Vincent D’Onofrio).

Eventually, the Punisher seemingly accomplishes his goal, uncovering a plot from his former Colonel Ray Schoonover (Clancy Brown), also known as the drug lord the Blacksmith and defeating him. He makes awkward peace with Daredevil and they part ways, setting off on his own journey in The Punisher (2017).

Last we saw of the Punisher, he had unraveled an even bigger plot behind the death of his family, and had managed to survive the entire Thanos (Josh Brolin) debacle and “Snap” — horrifically murdering the cabal of criminals and gang members in front of him with no mercy.

What Comes Next For The Punisher in The MCU?

Perhaps Bernthal’s Punisher comes back to strike another awkward truce with Daredevil and the lawyers of (now) Nelson, Murdock and Page, in the face of Kingpin’s next big plot. Or maybe he might become a player in the “street-level” team of heroes Kevin Feige hinted at, featuring Cox’s Daredevil and Tom Holland’s Spider-Man or even in the new Thunderbolts series confirmed at San Diego Comic Con 2022, that would consist of several villain-adjacent anti-hero-types hired to join a superhero team.

Fans would definitely be excited to see the Netflix Marvel and The Defenders (2017) and spin-off casts return to the Marvel Cinematic Universe proper. We’ll have to stay tuned to future updates from Marvel Studios on the future of Phase Five and Six — and potentially to September’s D23 convention.

Do you want to see Jon Bernthal’s Punisher return? Share your thoughts below in the comments!

Comments Off on Jon Bernthal’s Punisher Might Be Back In The MCU, Marvel Star Lets Slip