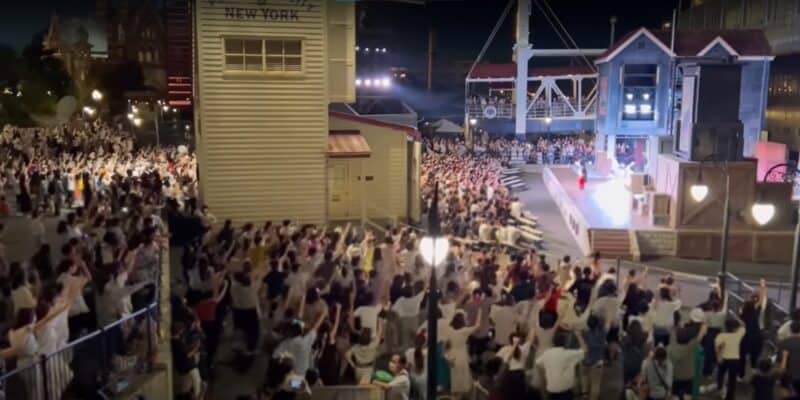 There’s a hot new dance craze hitting the Disney Parks — and it all started with one Mickey Mouse.

Over in the Tokyo Disney Resort’s theme parks, Tokyo Disneyland and Tokyo DisneySea, hundreds of “Disney Adults” have been spotted lately unashamedly dancing along to an addictive song and dance called “Jamboree Mickey” — led by the Mouse himself.

Now, it seems that every day, outside and around the Jamboree Mickey! Let’s Dance!’s Dockside Stage at Tokyo DisneySea’s American Waterfront Port of Call, swarms of “Disney Adults” in the hundreds congregate to dance in unison for 15 minutes straight, along with two energetic dancing Cast Members, Mickey Mouse, Minnie Mouse, Donald Duck, and friends.

(translated) I’ve heard rumors, but this festival is irresistible 🤟✨
#TDR_now

This is in fact, a video of the infamous “Jamboree Mickey” phenomenon that occurs almost daily at the Tokyo Disney Resort, now.

What is Jamboree Mickey, and why are adults dancing?

Jamboree Mickey actually arrived to the Tokyo Disney Resort as a children’s entertainment program within the theme parks in 2019. Currently, it is performed 3-5 times a day on live stages at both Tokyo Disneyland (Theatre Orleans) and Tokyo DisneySea (Dockside Stage), after a hiatus due to COVID-19. The catchy tune features a remix of the iconic Mickey Mouse Club theme song, and started off on the parade route, a “street party” not unlike those found at Walt Disney World’s Magic Kingdom.

When it debuted, the song and dance were even performed on Japanese national television, in a collaboration with popular Japanese pop girl group, Nogizaka46, where they danced alongside little kids, as well as Mickey and Friends from the Disney Parks:

However the infectious quality of the song and dance has, over time, ingrained itself into public consciousness, and many “Disney Adults” have begun turning up to the Tokyo Disney Resort live shows — perhaps for a couple key reasons:

The first reason could be attributed to the COVID-19 pandemic that kickstarted an increase in health-focused activities in Japanese schools — especially in preschools and kindergartens. The Walt Disney Company had begun sending “Jamboree Mickey!” videos schools, encouraging kids to learn the dance. Over time, it seems like the earworm-y song and repetitive dance successfully spread to parents and older generations.

The second reason could have been this adorably excitable Pinocchio who went viral after being spotted in Tokyo Disneyland, enthusiastically dancing to Jamboree Mickey! around the Park and comedically engaging the Park Guests:

After Jamboree Mickey! returned in April 2022 after a hiatus, again due to COVID-19, the show had begun growing a steady following of Guests dancing at the cordoned off areas beyond the provided seating, several dedicated souls — who all knew the choreography by heart:

Now, the daily Tokyo Disney Resort stage show’s “Disney Adult” phenomenon is known to locals as “Adult Jamboree Mickey” (the title of the following video), and regularly boasts overflowing crowds of people who’ve all learned and prepared the dance in advance of their big day out at the Disney Parks, spilling even behind the buildings into the Land’s walkways:

Overall, it truly seems like the craze isn’t set to wane — instead it’s growing bigger and more prolific by the day. The simple and catchy Mickey-themed song and dance burrow into people’s brains, which has turned watching Jamboree Mickey! at the Tokyo Disney Resort into a truly unique experience.

What do you think about this new Mickey Mouse dance craze? Would you dance this if you could? Share your thoughts in the comments below!