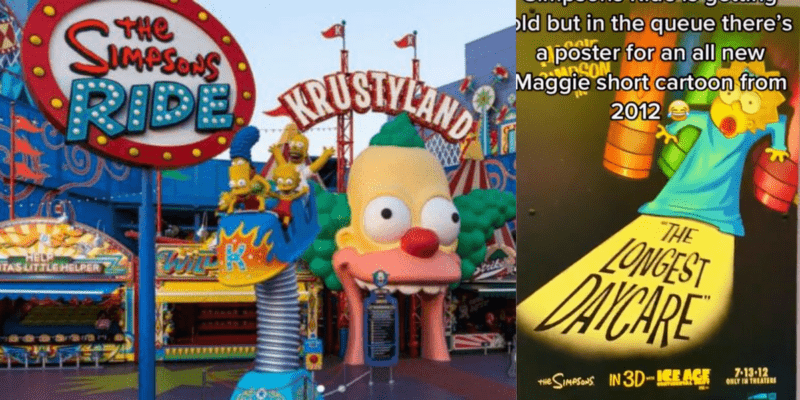 The Simpsons’ days at Universal Orlando Resort and Universal Studios Hollywood are numbered. The Walt Disney Company announced it would purchase 21st Century Fox for $71.3 billion in 2017 and officially completed the merger in 2019.

This gave Disney ownership of hundreds of classic films and television shows like James Cameron’s Avatar (2009), Ice Age (2002), Anastasia (1997), and The Simpsons. Springfield Land, currently at Universal Studios Florida and Universal Studios Hollywood, will likely be no more when Universal’s contract with FOX expires in 2025.

One TikToker discovered that Universal Studios Hollywood might be neglecting the ride ahead of its imminent closure. @johnnymetro77 posted a video of a poster in the queue for The Simpsons Ride:

“I’m not saying The Simpsons Ride is getting old but in the queue there’s a poster for an all new Maggie short cartoon from 2012,” the Guest wrote. He noted that he still loves the ride, but it’s beginning to show its age after 14 years.

All-new Simpsons animation was created for the ride, and also the preshow and queue areas.

The ride animation is shown on a gigantic 80-foot diameter domed surface.

What do you think will replace The Simpsons Ride at Universal Orlando Resort and Universal Studios Hollywood when the Parks’ contracts end in 2025? Do you think The Simpsons are headed to Walt Disney World Resort?