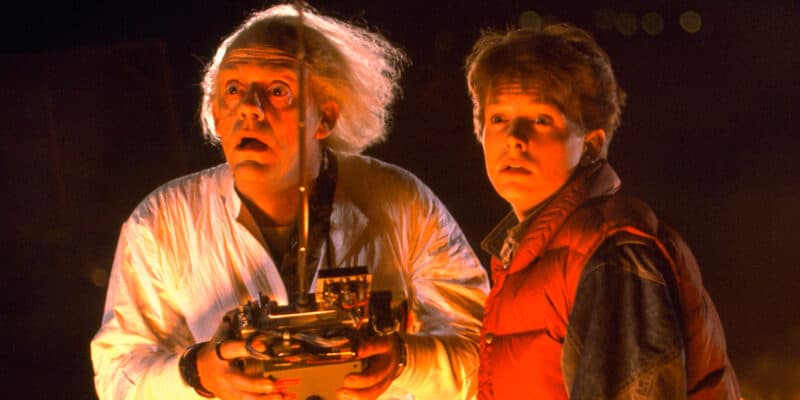 After being retired in 2007, Universal Orlando fans have always wondered if Back to the Future: The Ride might ever make a return.

Universal Orlando Resort is home to many thrilling attractions, but there are now just two attractions left standing that were a part of the original opening for Universal Studios Florida: E.T. Adventure Ride and the Horror Makeup Show.

With so many changes taking place and iconic rides being removed along the way, Universal Orlando fans have become increasingly obsessed with nostalgia. The latest Universal Tribute Store shows this with merchandise from three fan favorites: JAWS, E.T., and Back to the Future.

Now, it seems that there may be some consideration for bringing back the beloved attraction based on the film starring Michael J. Fox (Marty McFly) and Christopher Lloyd (Doc Brown) in some capacity.

Orlando ParkStop’s Alicia Stella recently revealed that there is still hope for a new attraction to come to Universal Studios Florida in 2024 prior to the opening of the Epic Universe in 2025.

While Stella was quick to point out that Universal hasn’t confirmed anything, there have been many rumors swirling that a nostalgic ride could be coming to Universal Studios in the form of Back to the Future or even Ghostbusters.

Here’s what Universal says about the retired attraction:

Great Scott! Doc Brown sent you screaming through time and space on a 1.21-jigowatt adventure—in Sensurround, no less. You’d fly from 2015 Hill Valley through an Ice Age avalanche, into the clutches of a dinosaur and back to the future, all to stop Biff from altering the future. Doc and friends left us in 2007 to make way for The Simpsons Ride™.

Another major change that is being seen currently is the growing presence of DreamWorks Animation in the KidZone. While Fievel’s Playland just received some updates, it seems that Universal Orlando may be working towards letting the IP– which features brands such as Shrek, Kung Fu Panda, Trolls, and others– take over the entire area, even with a possible ride as well.

Some have speculated that this change won’t take place until after the opening of the Epic Universe, but there are others who believe we could start to see some major movements as soon as the rumored Minions attraction is opened.

What would you think of a new Back to the Future ride at Universal? Let us know in the comments!