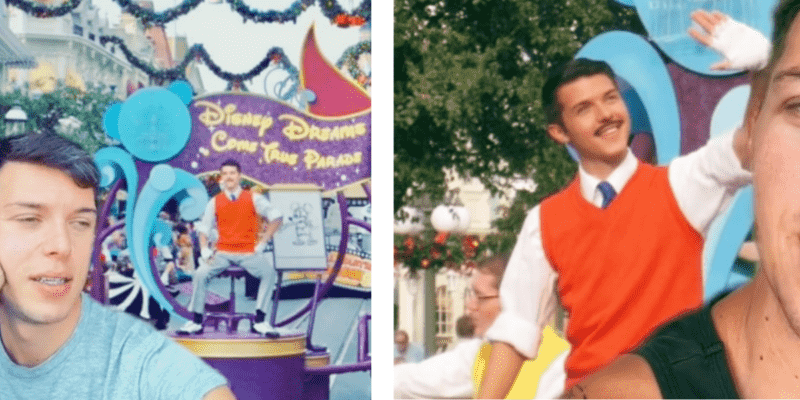 Related: Disney Cast Member Feels The Cast at EPCOT Is “Sabotaging” the Park

Entertainment Cast Members, or Disney Character Performers, work in parades, meet-and-greets, and shows at the Disney Parks. Devin (@devinsparkl3s) is a TikToker and interior designer who used to work in entertainment at Walt Disney World Resort. Last week, he shared a story from his time at The Walt Disney Company:

In his first video, which you can view above or by clicking here, Devin explained that he was never authorized to be a “face character” at Walt Disney World Resort. Instead, he played “fur characters” or costumed characters, like Tweedle Dee and Tweedle Dum. Expecting a typical day at Magic Kingdom, Devin went to work one day and was told to get dressed – he was going to lead the Disney Dreams Do Come True Parade as the Man Behind The Mouse – Walt Disney.

Devin posted another video later that day, which you can view below or by clicking here, with another photo from his time as Walt Disney in 2008 or 2009. Though he only played the character once, Devin said he was incredibly proud to have the opportunity:

“But what I’m reminded by now and p*sses me off is that I didn’t get paid face premium for that,” Devin explained. “I still got my mover rate for Tweedle, which is some bullsh*t. I should’ve gotten a pay bump for acting.”

“I’ll tell you what, you couldn’t tell me sh*t that day. I was on cloud nine,” Devin said. “I went home to my roommates, and I was like, you’ll never guess what happened at work today.”

Did you ever see the Disney Dreams Do Come True Parade at Magic Kingdom?

Related: Disney May Stop Using the Terms “Princes” and “Princess”