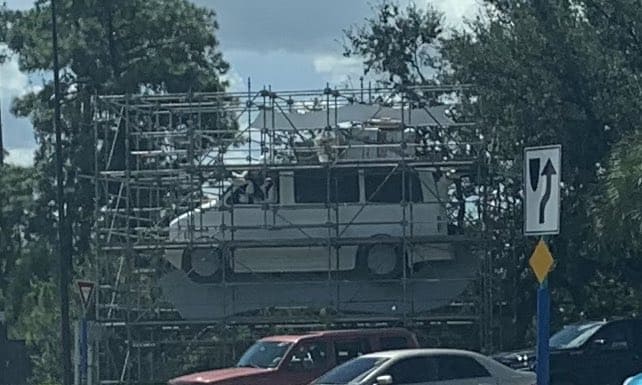 If you have been a part of the Disney community for any amount of time, you will surely already know about the sad fate of several iconic landmarks across the Walt Disney World Resort.

The first of two big blows came in the form of the classic Tower of Terror sign being completely demolished just days after we learned it would be removed.

When Guests used to drive down World Drive, they used to be met with an enticing promotional sign of Disney’s Hollywood Studios’ Tower of Terror. The sign shows one of the elevators from the ride shaking and moving within the famous Hollywood Tower Hotel, getting Guests excited to enter the theme park and take on this thrilling ride.

Unfortunately, for an unknown reason, Disney opted to get rid of the beloved sign. This sign was not operating for a while until Disney recently fixed it, making this reported announcement even more curious.

The second situation involved Disney removing one of the welcome signs of the actual Resort, specifically the one that featured Mickey and Minnie on opposite sides of Guests driving by. Over the course of a week, Disney completely ripped both Minnie and Mickey from the installation.

A few weeks back, a photo shared online sparked a debate about whether or not Disney is preparing to demolish yet another iconic road sign at Walt Disney World. This specific sign is the DVC sign, featuring Goofy, Pluto, and other characters in a van, presumably heading to one of the many Disney Vacation Club destinations.

White primer added to DVC billboard refurbishment prior to repaint at WDW.

White primer added to DVC billboard refurbishment prior to repaint at WDW. pic.twitter.com/wPa2yoamgj

The new photo shows the van completely covered in white primer, so it’s safe to say the sign will be staying for the time being. However, as mentioned earlier, the Tower of Terror sign was fixed before it was demolished, so it’s anyone’s guess what the actual fate of this sign is.

What’s your favorite landmark across the Walt Disney World Resort?