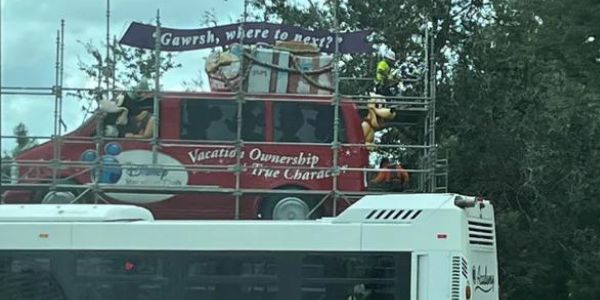 In the past few months, Disney has destroyed several structures that Guests would consider “iconic.” The first blow came in the form of the classic Tower of Terror sign which was demolished a few weeks ago. The second blow came when Guests found out Disney was removing the welcome sign, completely ripping both Minnie and Mickey from the installation.

Now, another sign is being worked on, and currently, its future is uncertain.

A photo shared online sparked a debate about whether or not Disney is preparing to demolish yet another iconic road sign at Walt Disney World. This specific sign is the DVC sign, featuring Goofy, Pluto, and other characters in a van, presumably heading to one of the many Disney Vacation Club destinations.

This sign has resided on the Disney World property for some time, so seeing this go, along with others, would be a devastating move to hardcore Disney fans. Check out the photo below:

Be prepared – now they’re tearing down this sign too

Some in the comments feared the worst that another iconic and nostalgic sign is sated for the chopping block. Others weren’t so quick to jump to conclusions, noticing that there was scaffolding installed. This leads us to believe that Disney may just be renovating it or giving it a nice new paint job.

Disney has not made an official statement on the status of the sign or what it plans to do with it. Make sure to check back here at Inside the Magic for all future updates!

Would you be upset if Disney removed this sign?