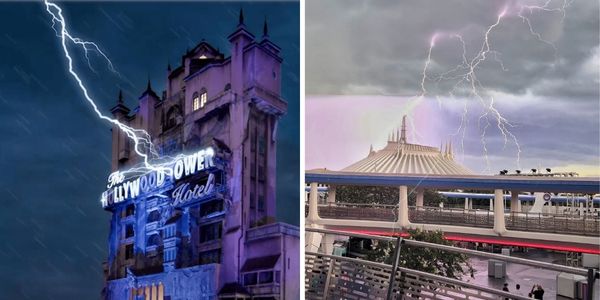 Over the last few weeks, we have seen multiple examples of the intense amounts of rain at Disney World, with several attractions being evacuated. Some Guests found themselves in an unlucky position when the rain started – on board the Tomorrowland Transit Authority PeopleMover at Magic Kingdom.

This trend continued at Disneyland Paris, with the Resort facing harsh temperatures and even harsher storms, leaving both Parks completely underwater. However, None of the Disney Parks seem to have as brutal weather as the Walt Disney World Resort faces on a regular basis, with high temperatures and brutal humidity beating down on Guests daily.

Recently, the Walt Disney World Resort faced some intense storms accompanied by lightning strikes. Several Guests were able to capture photos of the strikes, and the results are unbelievable.

Hospitality Professional and Director of Revenue Management Scott Campbell (@scottcampbell) shared a few pictures of the storms, with one photo in particular actually showing lightning that nearly struck them as they rode the Tomorrowland Transit Authority PeopleMover. You can see the full suite of photos linked below:

This was some insane storm over the Magic Kingdom today. Had one bolt strike right next to me as you can see if you zoom in on the first pic.

This was some insane storm over the Magic Kingdom today. Had one bolt strike right next to me as you can see if you zoom in on the first pic. pic.twitter.com/udtTVoSt7k

Campbell went on to show the Park shortly after the storm:

But the sunset that followed was something else.

But the sunset that followed was something else. pic.twitter.com/LxlVruDXFB

To round things off, Brayden (@SirBrayden) caught an incredible photo of The Tower of Terror with lightning surrounding the top of the building, making for an intimidating but fitting sight for the end of Sunset Boulevard:

Hopefully, the weather clears up soon, and Guests won’t have to worry about rain or lightning while exploring the Disney Parks for the remainder of the summer!

Have you ever experienced any intense storms while visiting Disney World?