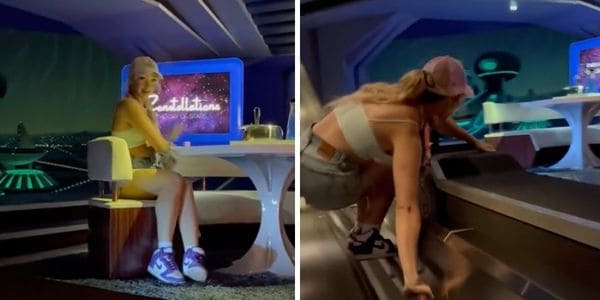 While there are so many great rides at Disney World, few can compare to Space Mountain.

Though it’s quite old, bumpy, and may leave your back aching, Space Mountain is still classic Disney World in every sense of the word. It’s thrilling, well-themed, and overall just a great ride. After Guests ride Space Mountain in Tomorrowland at the Magic Kingdom, they disembark the ride vehicle and begin the infamous long walk back into the Park.

This walk contains a lot of cool scenes to look at, envisioning what the future of space travel may look like one day. These scenes feature a deep-sea exploration unit as well as a look at different planets and how we may hypothetically live on them one day.

But perhaps the most iconic section of the display is the futuristic city concept at the very end of the hallway.

This vignette, which is shown above, imagines what a futuristic city of tomorrow may look like, as it channels the original idea for EPCOT as well as EPCOT’s defunct Horizons attraction. This scene has always resonated with a lot of Guests, as Disney is quite skilled at creating little slices of life that look so good you just want to hop over into it and live there yourself.

Another great example of this might be the world Disney created with Animal Kingdom’s Flight of Passage queue or Living with the Land’s initial prairie scene at EPCOT.

But of course, you are not supposed to actually hop over the fence and interact with these elements.

Unfortunately, one Guest either didn’t get the memo or disregarded it entirely as they went into this off-limits area in Space Mountain. A video was recently shared on TikTok showing one Disney World Guest doing the unthinkable.

The full video can be seen below:

As you can see, the Guests leap over the barrier, which is not too tall but still quite a jump. Then they sit in the fake dining room/kitchen area of this little scene next to the robot server.

The video ends shortly after, but it’s safe to say if any Cast Member witnessed this, the Guest will most likely get in serious trouble, which may even include a ban from the Parks. This action goes against Disney’s rules as it not only puts the Guests in danger but she also could damage the props and other elements of this area.

We aren’t sure what repercussions this Guest faced, but they easily could’ve been met with a ban from the Walt Disney World Resort for this stunt, which is why we strongly encourage you not to do this yourself.

Have you ever seen anyone do something like this at Disney World?