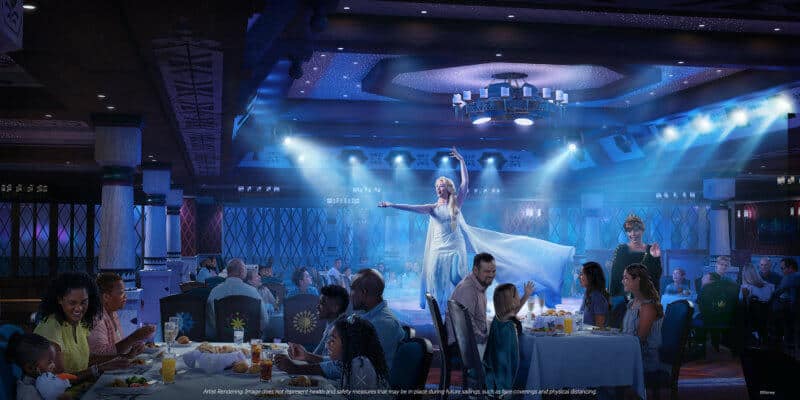 Arendelle: A Frozen Dining Adventure is one of the three new restaurants aboard the Disney Wish, the latest Disney Cruise Line to set sail.

I was able to experience the Disney Wish recently, including Arendelle: A Frozen Dining Adventure, and I hate to say it, but I was extremely disappointed.

For starters, from the second we were brought to our table, the entire atmosphere felt hectic. Servers were running around frantically, with what looked to be absolutely no system.

This is my fourth Disney Cruise and every other time I was seated for my dinner, the waiters and waitresses had a system in place. However, at Arendelle, there were waiters bumping into one another, running past each other, trying to squeeze into tightly spaced tables to take Guests orders — overall, it just seemed so overwhelming and hectic.

We were seated at a table in the back, which we thought would be fine, but we were wrong. The sound system where we were was pitiful, we could barely see the center stage, and when the characters came around to the tables, we were stuck in the back against the wall so we couldn’t even interact with the characters while other Guests were able to take selfies and have conversations with Anna, Elsa, Kristoff, Oaken, and Olaf.

If we were seated at a different table, I’m sure the show would have been enjoyable, but from where we were, we couldn’t see anything and we could barely hear when the characters would talk to the crowd.

And half of my party was seated with their backs to the stage so in order to see, they have to turn around, which was extremely difficult to do while they were also trying to enjoy their food.

Overall, it just felt like the set-up and the layout of the restaurant was not fully thought through and some Guests did not get the same experience as others, which is extremely disappointing considering how much we paid to vacation on the Disney Wish.

I ordered the Frozen Fractals, which consisted of Ciroc, Peach, Moët & Chandon Ice. It was very tasty and flavorful, I just wish it was a bit stronger considering I paid $16 for it.

For starters, I ordered the Elsa’s Royal Baked Scallops, which was Shrimp Tarragon Bisque, Rainbow Carrots, Leeks, served in a flaky Pastry. The scallop was a bit rubbery since it sat in the bisque, but the pastry and the flavors were beyond expectations.

For my entree, I decided to try the Pan-seared Chilean Sea Bass White, served with Asparagus, Petite Leeks, Savoy Spinach, Romanesco, Peas, Kohlrabi, Rainbow Carrots, seared Scallop, Pea Tendrils, and Mjod Vinaigrette. This was one of the best pieces of fish I have ever tasted. I highly recommended trying this if you are a seafood eater.

For dessert, I tried the Kvafjordkake, which is Butter Cake, Baked Almond Meringue, Vanilla Cream, and Berry Compote. This was absolutely delicious. It was light, sweet, and flavorful. The perfect way to end the meal.

Overall, the food and drinks were amazing at Arendelle: A Frozen Dining Adventure, but the service and the show led to extreme disappointment.

You’re cordially invited to celebrate the royal engagement of Queen Anna and Kristoff during this enchanting dining experience.

Feast on a flurry of Norwegian-inspired dishes made by Oaken himself. His palate-pleasing menu for Arendelle: A Frozen Dining Adventure showcases the traditional flavors and ingredients of the Nordic region with a contemporary flair.

Delight in a smorgasbord of superior seafoods, rustic game dishes and tasty nods to the Frozen story. And be sure to leave room for dessert! After all, it wouldn’t be Queen Anna’s party without plenty of delicious chocolate on hand.

A Party to Melt For

Join Anna, Elsa, Kristoff and Olaf for a gala of Nordic proportions—with food, entertainment and loads of Frozen fun.

Get ready to pick up where the Disney animated film Frozen II left off, with catering provided by Oaken’s “Hearty Party Planning Service… and Sauna”—plus live entertainment by “local” musicians performing favorite Frozen songs sure to warm your heart.

As an honored Guest, you’ll be seated at a dining table situated around a center stage, where you can enjoy all the theatrical bells and whistles needed to bring the Frozen story to life in 360-degree glory. Invisible fiber optics embedded in the ceiling conjure Elsa’s icy magic, while panoramic windows magically transform from real-time ocean views to the colorful dancing lights of the Aurora Borealis.

Olaf will also be on hand to lend his signature humor and charm to the merriment. Through true-to-scale, cutting-edge puppetry, you can even talk and interact with him while you dine. And finally, be amazed as Queen Anna and Kristoff step on stage to reveal their brand-new look.

After dinner, join the festivities with fun table crafts, hilarious sing-alongs and a grand finale that’ll have everyone in the audience on their feet.

Have you had the chance to experience Arendelle: A Frozen Dining Adventure? Let us know in the comments below.

The opinions stated in this article do not reflect Inside the Magic overall.