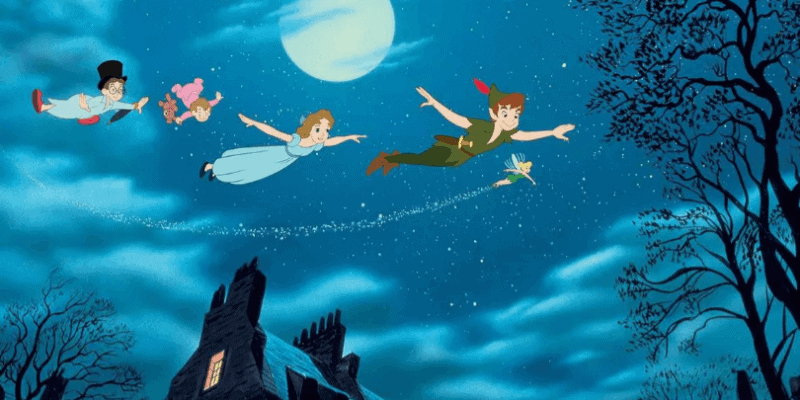 When Walt Disney was alive, Walt Disney Animation Studios created some of the most iconic animated films of all time.

Related: Voice of Ursula From Disney’s ‘The Little Mermaid’ Passes Away at 95

The first feature-length animated project, Snow White and the Seven Dwarfs (1937), was known internally as “Walt’s Folly” because nobody believed it would succeed. Audiences proved them wrong, and the original Disney Princess movie gave rise to dozens of other projects, including Alice in Wonderland (1951) and Peter Pan (1953).

Related: Does ‘Beauty and the Beast’ Poke Fun at Disney’s Rival Park?

A recently shared fan theory places these two iconic animated movies in the same universe in a very unexpected way — at least one Disney lover believes that young Alice grows up to be Wendy Darling’s mother in Peter Pan.

The theory [screenshot below] reads:

Wendy’s mother in Peter Pan is actually Alice from Alice In Wonderland.

In a scene in Peter Pan, Wendy talks about Peter Pan’s shadow and that she had kept it in a drawer; Wendy then says that she is waiting for Peter to return to get his shadow. Pay close attention next time you watch this scene. In the scene, Wendy says, “I’m waiting for him to come back to get his shadow.” Hearing this, Wendy’s mother, Mrs. Darling, is shocked and concerend and says, “Shadow, who’s shadow?”

Wendy says, “Why Peter Pan’s, of course!” Mrs. Darling has a look of concern and worry on her face. She then says, “Oh yes…goodnight, dear.” There’s more here than meets the eye. Why would Wendy’s mom be concerned? It’s because she is Alice from Alice In Wonderland and she’s worried that Wendy knows about the mad place and land.

If you look at pictures of Alice and Wendy’s mother, Mrs. Darling, they look very similar. As Alice grew older, her hair turned red — it is proven that over one’s lifetime hair color can chance — my theory is Mrs. Darling is Alice grown up.

Related: Dog Reacts With Concern While Watching ‘The Lion King’ in Viral Video

Intriguingly, there is already a connection between all of these characters. Actress Kathryn Beaumont, who was just 10 years old in 1951, voiced both Alice and Wendy Darling.

While it was common for actors and actresses at the time to work repeatedly for the same studio, this does add a bit of credence to the fan theory — it’s likely that Mary Darling’s daughter would have sounded like she herself did in childhood.

This theory has never been confirmed by anyone at Disney, but it certainly gives fans some food for thought while watching these classic films! Alice in Wonderland got the live-action treatment — with Johnny Depp as Mad Hatter — in 2010, and Peter Pan & Wendy, an upcoming live-action version of Peter Pan, is in the works.

The official description of Alice in Wonderland reads:

Join Alice as she chases the White Rabbit and journeys into a topsy-turvy world that gets “curiouser and curiouser” as her fantastical adventures unfold. Meet the Mad Hatter, March Hare, Tweedledee & Tweedledum, the Cheshire Cat, the Queen of Hearts and more unforgettable characters, all set against a backdrop of awe-inspiring splendor.

What do you think about this Disney movie fan theory?