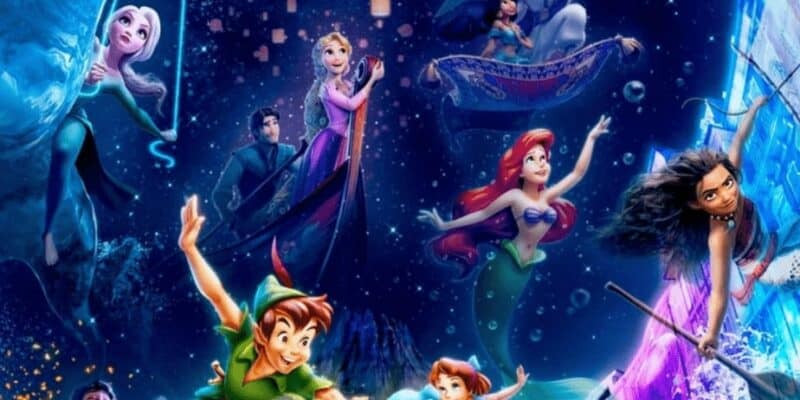 Brand new nighttime spectacular Believe! Sea of Dreams takes the place of tried and true, fan-favorite show Fantasmic! this November 11, and The Walt Disney Company are planning to keep Disney Park fans updated throughout the process.

The classic, Mickey-centric, Disney Park staple Fantasmic! has delighted audiences and Disney Park Guests for years, becoming an iconic show within the Parks. Fantasmic! has seen iterations in California’s Disneyland Park in the Disneyland Resort, as well as formerly at Disney-MGM Studios (now Disney’s Hollywood Studios) at Orlando, Florida’s Walt Disney World, and in Tokyo DisneySea at the Tokyo Disney Resort in Japan.

However, as the Tokyo Disney Resort says goodbye this year to their uniquely 360-degree iteration of the show, the number of remaining shows featuring Fantasmic!’s iconic theme tune dwindles sadly to one — for the moment.

In an interestingly transparent move following much speculation and teasing, The Walt Disney Company and Oriental Land Company have announced via the official Tokyo Disney Resort Twitter that they will be introducing excited fans to the brand new show that’s replacing Tokyo DisneySea’s unique version of Fantasmic!, following a prolonged closure due to the COVID-19 pandemic.

Tokyo DisneySea’s new nighttime entertainment “Believe! ~Sea of Dreams~” will begin on November 11th. We will be sharing what the daily state of development looks like on-site with all of you, for four days starting from today!

This new video highlighting the sheer amount of work put into this new show replacing Fantasmic! is definitely intriguing, as we get to see a sneak peek of the new floats fully equipped with the latest Imagineering technology, along with several teams of Imagineers hard at work.

Check out the high definition LED screens and sparkly pirate ship — likely from the new Peter Pan section of the show that Tokyo DisneySea was missing in its initial version of Fantasmic!.

Additionally, the music heard in the video could even be a bit of a sneak preview to what Believe! Sea of Dreams will sound like.

The old Fantasmic! show at Tokyo DisneySea definitely knew how to tug at Guests’ heart strings — boasting the unique ability for a Guest in any of the Park’s “lands”, or “Ports of Call” (in-keeping with the Society of Explorers and Adventurers, or S.E.A. theming), to view the gorgeous spectacle.

We never know — if this new show goes over well with local audiences in Tokyo DisneySea and the Tokyo Disney Resort as a whole, it’s possible that we might see a Fantasmic! nighttime spectacular do-over in other Disney Parks as well. The Tokyo Disney Resort is trying its absolute best to get locals excited for Believe!, with exclusive paid experiences and seating areas reserved for these Guests.

Here’s hoping that Believe! lives up to the hype, and instead of relying too much on tech and intellectual property, delivers an equally (if not more) emotional and impressive show.

Do you think this show could replace Fantasmic! at Disneyland? Are you looking forward to seeing more of the new Believe! show? Share your thoughts in the comments below!

When it arrives next year, Park Guests will enter new themed land Fantasy Springs through an enchanted waterfall grotto, that opens into a magic-filled Port where Guests can find themselves visiting Peter Pan’s Neverland, Rapunzel’s Tower and Kingdom of Corona, and Anna and Elsa’s Arendelle: World of Frozen — potentially even check-in at a luxury hotel located right inside Fantasy Springs, too.