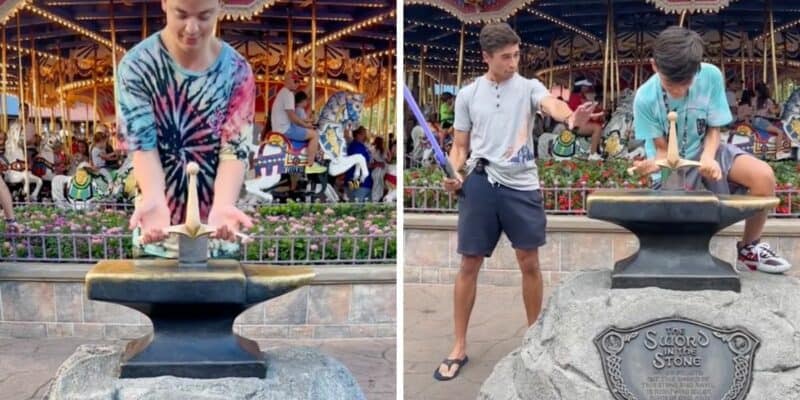 TikToker jojocrichton has been so dedicated, he has been visiting Magic Kingdom nearly every day in an attempt to become the King of Fantasyland.

The TikTok user has been posting videos to social media showing his attempts at trying to become the King of Fantasyland. In one attempt, he even tried talking nice to the sword, hoping a little flattery would help (spoiler alert, it didn’t):

JoJo’s videos have been taking over social media as many are rooting for him. Unfortunately, he has not been deemed worthy (yet), and other TikTokers are chiming in, claiming Disney may be sabotaging and working against TikTokers.

TikToker brerknoll posted a throwback video, saying that perhaps “Disney has something against viral TikTokers” as another user @danielmccoin tried to pull the sword and also failed. They wrote:

Throwback to when Daniel was here! Valiant effort! @danielmccoin @JoJo you aren’t the only one 😂 #disney #wdw #wdw50 #magickingdom #swordinthestone

Throwback to when Daniel was here! Valiant effort! @danielmccoin @JoJo you aren’t the only one 😂 #disney #wdw #wdw50 #magickingdom #swordinthestone

Someone else commented, tagging Disney Parks’ TikTok asking if this was true, but Disney has not responded.

If you want to follow along on JoJo’s journey to try and pull the sword from the stone, you can find his TikTok here.