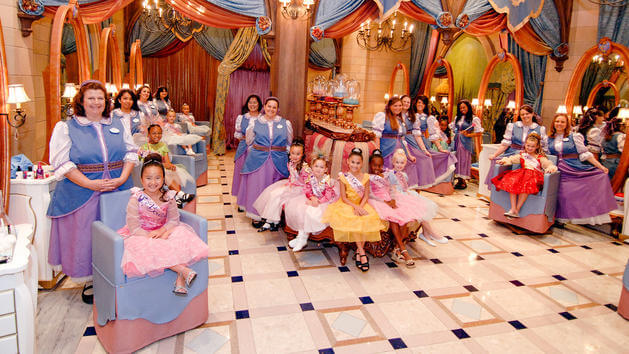 A week ago, Inside The Magic reported that the title of Bibbidi Bobbidi Boutique’s “Fairy Godmothers In Training” role would undergo a name change to “Fairy Godmother’s Apprentices” in an effort to be more gender inclusive for those providing the staple magical makeover experience who do not identify as female. Since the announcement, social media has been in an uproar.

The language on Walt Disney World’s website has already been updated, describing the experience as follows:

Behold a royal transformation as children become elegant princesses and shining knights—right before your eyes!

With the wave of a magic wand—plus a few hands-on tricks of the trade—our Fairy Godmother’s Apprentices will pamper and primp your child until they look storybook stunning. Children can choose a hairstyle then add makeup, nail polish and accessories—even a Disney costume.

Many were quick to share the news on social media, captioning their posts with strongly worded opinions.

Twitter user Alex Ray urged supporters of inclusive language at Disney to “stay out of politics” in their Tweet.

If your 3 year old understands the words gender or neutral or inclusive over fairy or mother or God then you need to stay out of politics.

If your 3 year old understands the words gender or neutral or inclusive over fairy or mother or God then you need to stay out of politics.#Disney https://t.co/Ichxjpl1cF

The US has just gone nuts. I’m sick of all this gender neutral crap. Bye Disney

The US has just gone nuts. I'm sick of all this gender neutral crap. Bye Disney

The Bibbidi Bobbidi Boutique is where little girls go to get Cinderella type makeovers at Disneyland and Disney World.
The ladies who do the makeovers have always been referred to as “Fairy Godmothers in Training.”
Enter the insane woke mob.
Disney kowtowed to the crazy people and announced they are changing the titles to “Fairy Godmother’s Apprentice,” because they said some women think they are men… or have no gender… or some other silly made up crap.
One day, the aliens will come here and wonder what drug made the whole world lose their sanity.

@HStradamus directed their Twitter response at the “bigots who are wasting time” posting negatively about the news, reminding them that it had zero impact on their lives or genders. “We get it!” @HStradamus wrote. “You’re a bigot, & you don’t wanna change.”

“Omg people are freaking out lol ok let me explain. The job title used to be “fairy god mother in training” meaning it was a job for women. Because they would inevitably become a godMOTHER. Now they are called “Fairy godmother’s apprentice.” Meaning they are not training to become a godMOTHER they are assisting the current god mother so now the job is open to men and women. This has nothing to do with changing the gender if a god mother and it isn’t taking anything away from you as a woman…….”

Though there are many opinions emerging from this announcement, it is important to note that zero changes have been made to Fairy Godmother’s character, or to the Bibbidi Bobbiidi Boutique experience itself in this process.

What are your thoughts on Disney’s Fairy Godmother’s Apprentice name change? Let us know in the comments.