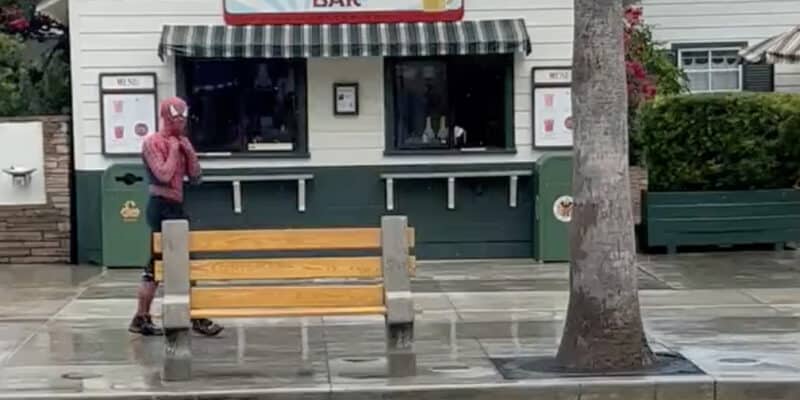 On a recent trip to Disney’s Hollywood Studios, some Guests witnessed an unexpected chase between security and a park-goer disguised as Spider-Man. That’s right, on July 10, 2022, your friendly neighborhood superhero was spotted sprinting down Sunset Boulevard.

tell me why i just saw spider-man sprinting away from tower of terror with security going after him?? what is going on?

tell me why i just saw spider-man sprinting away from tower of terror with security going after him?? what is going on?

Another Twitter user, who goes by Jake, shared a video of the incident, which you can see in the Tweet below.

Although we do not know exactly why the pursuit started, we can assume it was likely due to what is an undeniable dress code violation by the Guest in the above clip, seen walking in the rain wearing a head to toe costume. Actions taken by security following this mishap remain unclear.

According to the Disney’s Theme Park Dress & Costume Guidelines, such cosplay is strictly prohibited. With the exception of certain Halloween and Christmas Events and the occasional Star Wars themed get-up, costumes and costume masks are considered inappropriate attire for Disney Parks Guests.

Disney cites the following as inappropriate attire on their website:

As per the Disney Parks guidelines, those in violation of this rule are subject to denied admission or removal from Disney Parks, in an effort to protect “the experience of other Guests.”

In most cases, this is to prevent confusion between the public and the Cast Members/Performers. Although Guests won’t be seeing Spider-Man at Walt Disney World due to a longstanding licensing agreement with neighboring Universal Studios, dressing up as the superhero is still a no-no.

Disney bounding, however, is permitted as can be seen all over the parks. In these cases, Guests are often dressed not in costume, but rather in outfits inspired by their favorite characters. An example of Disney-Bounding can be seen in the photo below.

What do you think about Disney’s costume rule? Let us know in the comments!