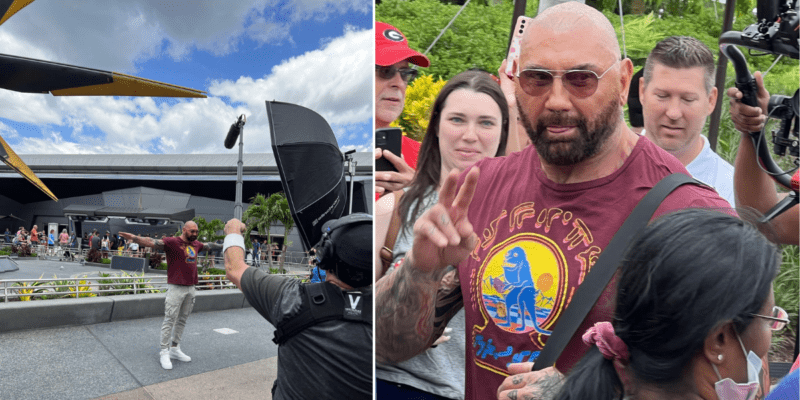 A few lucky Guests got to see one of the members of the Xandar crew up close and in person at EPCOT this week. u/Hawkholly shared a few photos of Dave Bautista at EPCOT:

Just got off the ride, and he walked out of the building next to the lightning lane entrance. There’s camera guys setting up near the big nova ship statue. Looks like they are maybe filming two cast members?

Edit again (Final???): My mom asked a cast member if they’re filming a commercial or promotional thing for the ride and she said she thinks so.

Inside the Magic will report any further information on this mysterious Disney Park film shoot!

Guardians of the Galaxy: Cosmic Rewind is one of the largest fully enclosed rollercoasters in the world and features the first-ever reverse-launch on a Disney Parks coaster! It’s recommended for tweens, teens, and adults, with a height requirement of 42 inches. From Disney:

Have you been able to ride Guardians of the Galaxy: Cosmic Rewind at EPCOT? What did you think?