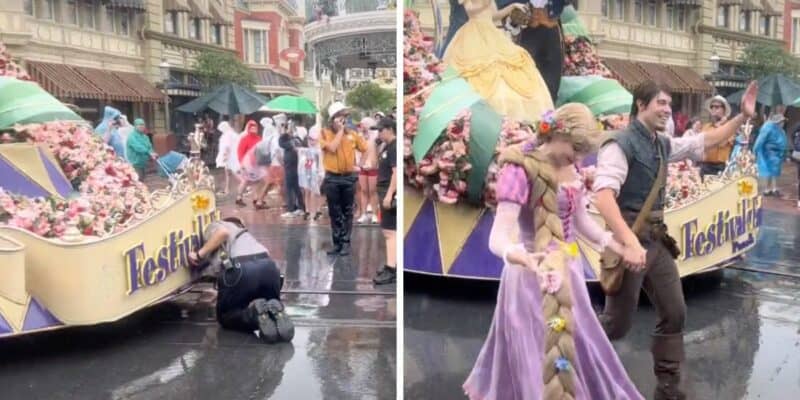 What many refer to as the 3 o’clock parade, Festival of Fantasy is a popular parade that strolls down Main Street, U.S.A. at Magic Kingdom.

Unfortunately for the Cast Members in the Festival of Fantasy parade recently, they had to walk in the pouring rain as the floats broke mid-route.

For starters, if you have never seen Festival of Fantasy, Disney World describes the parade as:

The other day, Magic Kingdom was the victim of a nasty rain storm, but that did not stop Guests as many gathered on Main Street, U.S.A. to catch the Festival of Fantasy parade. Unfortunately, however, one of the parade floats experienced technical difficulties and broke down mid-route — forcing the Disney Cast Members to walk the rest of the way (in the pouring rain!)

TikTok user unlockdisney shared the video to the social media platform along with the caption:

The floats stopped in the pouring rain for The Festival of fantasy parade! These poor cast members!! #disneyrain #festivaloffantasyparade #disneyworld #unlockdisney

You can watch the video below or by clicking here:

The floats stopped in the pouring rain for The Festival of fantasy parade! These poor cast members!! #disneyrain #festivaloffantasyparade #disneyworld #unlockdisney

Have you ever seen the Festival of Fantasy parade break down? Let us know in the comments below.