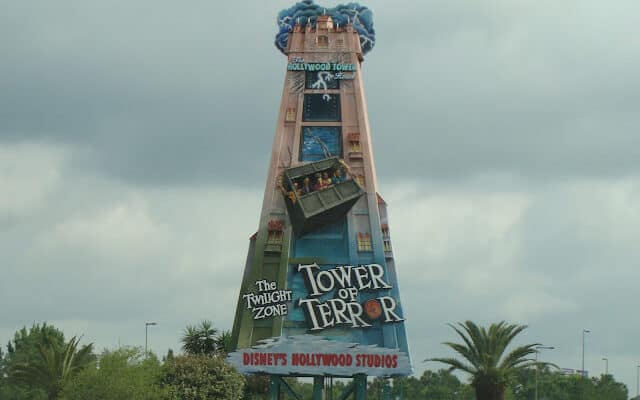 After the surprising revelation that Disney would be removing an iconic feature from its Resort, fans are now reacting to the sad news.

After the surprising news that Disney would be removing an iconic feature from its Resort, fans are now reacting to the sad news. When Guests used to drive down World Drive, they would be met with an enticing promotional sign of Disney’s Hollywood Studios’ Tower of Terror. The sign shows one of the elevators from the ride shaking and moving within the famous Hollywood Tower Hotel, getting Guests excited to enter the theme park and take on this thrilling ride.
However, a firestorm was started within the Disney community recently after it was revealed the iconic Tower of Terror sign would be removed. As of now, the sign is completely gone as Disney was quick with the demolition process. Now, fans are weighing in on this decision. Some explicit comments have been censored.

On Twitter, hundreds of fans shared their thoughts. @mollsrosebud said, “I’m genuinely so mad about the g**d*** tower of terror billboard like that s*** is PEAK Disney nostalgia don’t you dare”. In response to the confirmation that the sign would be removed shared by digital journalist Ashley Carter (@AshleyLCarter1), several fans discussed the removal.

@truckle4evr said, “More cost-cutting. Got to increase that bottom line. WDW is becoming a shadow of it’s heyday. Too bad, but people will still pay top dollar for a mediocre experience. @FastwingDuck32 said, “This is just incredibly sad seeing this go. I loved seeing the sign riding the bus on the way last year”

@corypietrzykNEW commented, “Honestly it’s soo sad. They are ruining it everything”

In our original story, several of our readers shared what they thought about the destruction of the beloved sign. Steph said, “Only means imminent doom for Tower of Terror, a Disney World classic staple. This is extremely depressing. One of my all time favorite rides and this is how it’s getting treated? Disgraceful.”
Carol said, “It’s a great sign greeting us to say… you made it! Don’t care if the motor works or not ! Why remove it? ToT isn’t going anywhere so why not keep the welcoming sign! Disn needs more Disn not less! Please don’t make it another location!”
In a Reddit post, even more fans shared their sadness regarding the removal of the sign. One user commented, “I mean it rarely ever works, though I’ll still miss it. Another user claimed that Disney is “ruining the arrival experience, saying, “Really does feel like they’re ruining the arrival experience, no magical express makes it just a generic bus ride or Uber, no signs on the way in ruins the buildup, I mean they’re even changing the colours of the road signs in celebration.”
As of now, we do not know why the sign was removed or if Disney has any plans of replacing it or adding a new sign for a more modern attraction in its place. Rumors about a potential retheme of the Tower of Terror attraction are also circulating now but nothing has been confirmed.
Will you miss this sign at Disney?