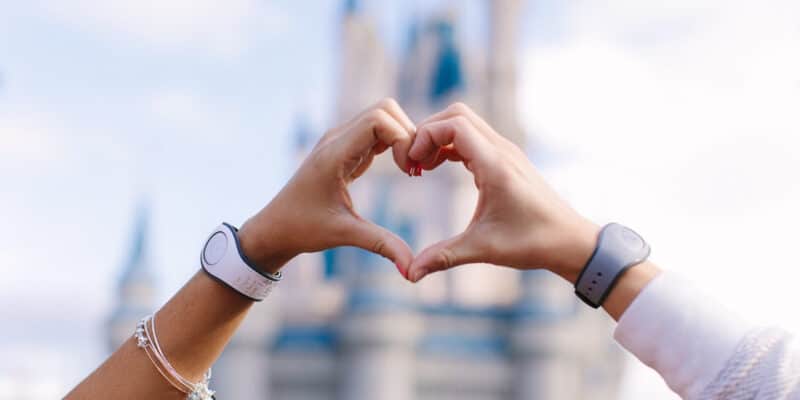 Last year, Walt Disney World officials teased the debut of the next generation of MagicBands — MagicBand+.

At Walt Disney World, MagicBand+ can do everything a MagicBand can do and more – from entering theme parks with a tap* and connecting your Disney PhotoPass memories, to unlocking your Disney Resort hotel room and more.

But our newest wearable also has great new features, including color-changing lights, haptic vibrations, and gesture recognition – plus it pairs to your smartphone using the My Disney Experience app. Once you get your hands on one, you’ll want to do it all – and there’s a lot you can do when MagicBand+ launches!

Jodi Benson, the voice of Ariel in The Little Mermaid (1989), even got in on the fun, trying MagicBand+ for herself at Magic Kingdom Park:

Now, these new MagicBands are officially available to both shopDisney.com visitors and Walt Disney World Resort Guests, and the reception has unfortunately been a bit chilly so far.

Although the 25+ designs are adorable and the idea of MagicBand+ features is very appealing, Guests have noticed some issues, like the fact that syncing with nighttime spectaculars like EPCOT’s Harmonious is off — software issues, though, are to be expected with any new product.

But it appears that the biggest problem with MagicBand+ might not be a fixable software situation. Instead, now that a couple of days have passed, Guests are realizing that the biggest issue is a reported lack of battery life.

Related: After Backlash Over Pay, Disney Spends Money on Upgrades For Cast Members

One Twitter user noted that the real-life reactions Disney influencers have had to the MagicBand+ experience differs dramatically from their “hosted” reviews:

Same bloggers hosted…
Magic Band + is the best invention to come to Disney since dole whip!

Related: Princess Tiana Is Headed To EPCOT Ahead Of Splash Mountain Retheme

Someone else chimed in, saying:

Probably not going to get it. I heard the battery life isn’t too good. I also would not be able to keep up with working the phone and watching my magic band going off. Sensory overload!!!

Yet another Disney World fan is curious if we’ll see a battery debacle akin to the infamous iPhone battery explosions:

Certainly not hoping this happens, but how long till we see Magic Band + batteries self-destruct? #magicbandplus

At this time, Disney has not issued any sort of statement regarding the purported short battery life of MagicBand+ products. It is important to remember, however, that battery life does tend to increase as new iterations of smart devices release — Apple ran into similar issues with the immensely popular Apple Watch, for example.

Have you tried MagicBand+ yet?