FIRST LOOK at New Interactive MagicBand+ In Action - Inside the Magic 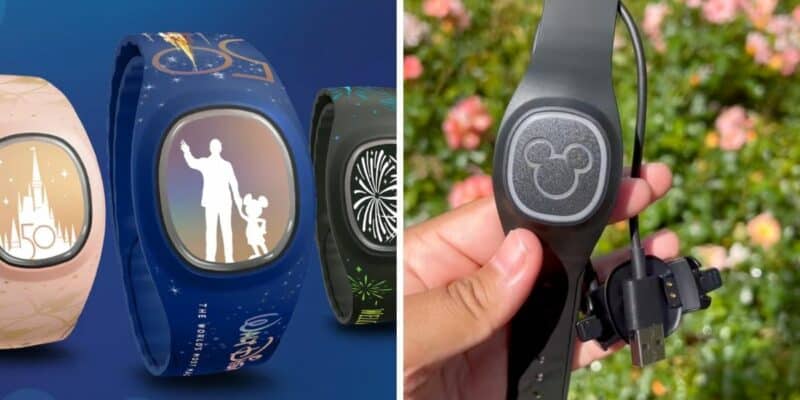 Last week, Disney caused quite a stir with the accidental release of the new MagicBand+ at Walt Disney World. They quickly pulled the product (priced at $29.99) off the shelves, offering refunds to Guests who purchased it as the interactive and in-app features wouldn’t be available until later this year.

Guests who bought the MagicBand+ before it was removed from shelves noted features such as lighting up during the fireworks, special missions in Star Wars: Galaxy’s Edge, and the ability to recharge.

Disney hasn’t kept quiet about the new MagicBand, though. Reporter Ashley Carter from Spectrum News 13 in Orlando, Florida had the opportunity to try out one of the MagicBand+’s unique features at an exclusive event.

She posted a video Wednesday afternoon of a Cast Member speaking to reporters in front of a golden statue of Mickey Mouse, similar to the golden statues erected in Magic Kingdom for Walt Disney World’s 50th Anniversary last fall.

In the video, the Cast Member tells reporters that they can wave to Mickey once their MagicBand+ lights up. In the Park, this would happen when they get close enough to the statue to trigger the interactivity, but the Cast Member appears to switch on the signal in the video manually.

After they’ve waved, their MagicBand+ lights up with a shimmering gold color, and Mickey speaks.

For Ashley, Mickey says, “Gosh, sure is a nice day!” But, in her Tweet, she notes that Cast Members mentioned each character statue in Walt Disney World Resort’s Magic Kingdom would have multiple greetings available:

And here’s a look at how MagicBand+ will interact with the Fab 50 character statues across the Disney World theme parks. Each statue will have multiple responses to guests. #DisneyWorld

And here’s a look at how MagicBand+ will interact with the Fab 50 character statues across the Disney World theme parks. Each statue will have multiple responses to guests. #DisneyWorld pic.twitter.com/B4TAR6WRtC

MagicBands have been a staple of Walt Disney World vacations for many years now. They replaced the need to carry around a plastic card ticket and allow you to get ride photos, make purchases, and enter the Park with just a tap of your wrist.

Last year, fans thought the popularity of MagicBands was dwindling. They were no longer included in Resort stays, and Disney rolled out features for smartphones and Apple Watches that mimicked all of the original functions of the bracelet. However, some fans complained that this drained their phone batteries, and they struggled with lousy cell service. With the release of the MagicBand+, it seems Walt Disney World is ushering into a new era of the MagicBand.

Inside the Magic will continue to follow new information on the MagicBand+ as it is released. Are you planning to purchase one? Let us know in the comments!