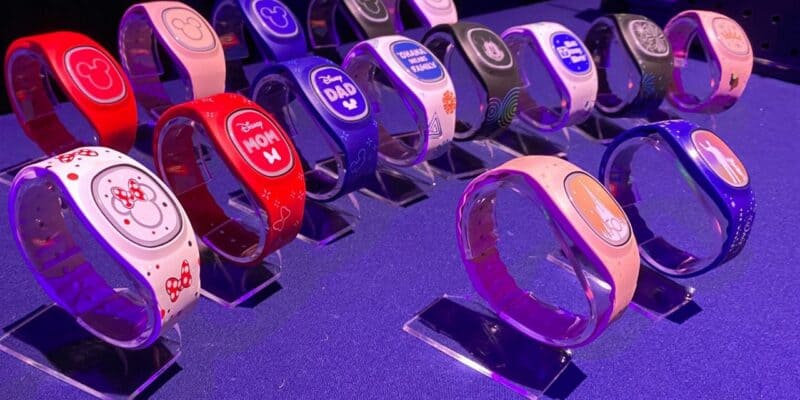 Related: Former Cast Member Reminds Guests, “We’re Not Here to Be Your Friends”

Disney recently introduced the next iteration of this system with its MagicBand+. MagicBand+ is an all-new MagicBand experience that many have been excited about for a long time. With new features and options, Disney’s MagicBand+ is set to become an even more interactive part of the Disney experience than the original MagicBands.

MagicBand+ is all about your Disney vacation and acts as a room key, your source for Disney Genie+, and Disney PhotoPass, among many other features. MagicBand+ also includes color-changing lights, gesture recognition, and haptic vibrations, as well as a new look. As before, the MagicBand+ will sync with a Guest’s My Disney Experience app, where Disney Park tickets, Park Pass reservations, and more can be connected with the device.

We got our first look at how MagicBand+ interacts with the Parks, specifically with EPCOT’s nighttime show Harmonious, as shared by reporter Scott Gustin (@ScottGustin):

For those who may not know, Harmonious is the exciting nighttime spectacular that takes place at EPCOT.

While exciting, the implementation left many confused and disappointed. The reactions to this new MagicBand were mixed, to say the least, and in the comment section, several fans voiced their concerns and first thoughts on the new product. In general, a lot of Guests and fans thought the first presentation of MagicBand+ was lackluster and not very exciting.

Lolol I thought it would sync with the music or something

Who is going to buy these? I mean seriously what do these things offer????

Device is a Borderline parody, respectfully

oh my…not impressed at all.

On Reddit, reactions were similar. One user said, “I don’t even get why people would want that, are you watching the show or your wrist?” Another said, “This is about as awesome as the special passholder entry animations that are barely audible and slow down getting the green light.”

Another user compared it to a “dollar store” item. Another said, ” That looks so sad. They would have been better off creating an Apple Watch app.”

Of course, this is a brand-new product, so there are always kinks to work out. We still are excited to see how it pairs with other offerings at the Walt Disney World Resort in the future. For more on Disney’s MagicBand+, check out our story here.

Will you be using a MagicBand+?