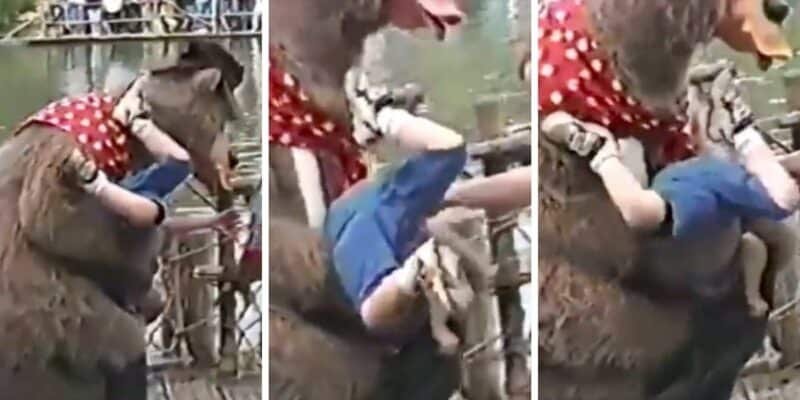 The Country Bear Jamboree attraction, formerly located at Disneyland and can now be found at Disney World, is considered controversial to some, especially when it comes to some of the song lyrics and stereotypes the audio-animatronics give off.

Despite the controversy, the Country Bear Jamboree characters can still be spotted inside Magic Kingdom at Walt Disney World for meet and greets. The bears are unique and make for fun, interactive experiences — although one time a Country Bear may have gone a bit too far.

An older video is resurfacing on Twitter, which shows a Country Bear from Country Bear Jamboree holding a child upside and shoving his head into his pants.

The video, which can be seen below, was reportedly taken at Disneyland several years ago.

It is unclear what exactly was happening during this video or if the Cast Member inside the Country Bear costume got in trouble or reprimanded.

The Country Bear Jamboree attraction is considered controversial to some, especially when it comes to some of the song lyrics and stereotypes the audio-animatronics give off.

The song lyrics aren’t the only things to be considered outdated. There is also certain dialogue that the bears say that can be considered offensive to some as well as the animatronics being pretty old (and a bit creepy).

Have you ever met the Country Bears at the Disney Parks? Let us know in the comments below.