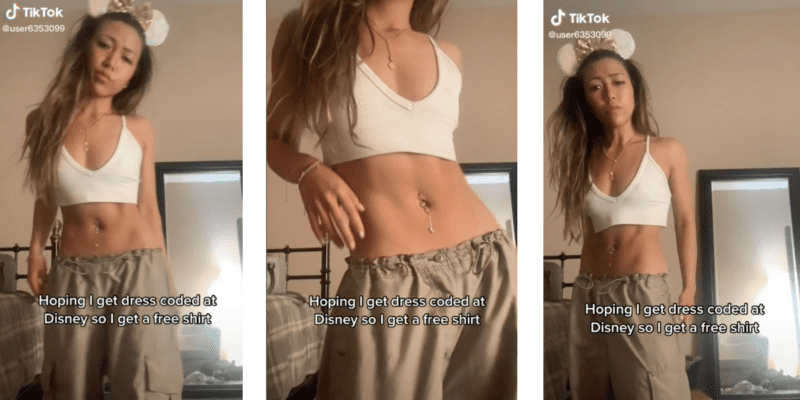 Last year, a controversial TikTok trend went viral regarding the dress code at Walt Disney World Resort. It started with a video by TikTok user Amanda DiMeo, who uploaded a video to her over 800,000 followers explaining how to get “a free Disney shirt of your choice.”

In the video, which got picked up by FOX News, DiMeo wore a cropped shirt that didn’t comply with Walt Disney World’s dress code and was given a voucher by Cast Members to get a free shirt at a Disney merchandise location. She says:

In another incident late last year, TikTok user @jordyngraime wore an open back top to Walt Disney World. She showed a receipt for a shirt that the Disney Park allegedly gave her for free.

Now, one TikTok user aims to revitalize the trend.

@user6353099 shared a video of herself posing in Minnie Mouse ears, a crop top, and joggers, with text that reads, “Hoping I get dress coded at Disney so I get a free shirt:”

♬ use this sound if ur cool – Minnie

One comment by MrBlank says “You have to pay for the shirts now,” which seems to be correct, though Disney hasn’t confirmed a policy change.

In a May TikTok video, Nicole DeLosReyes (@nicole.delosreyes) showed herself walking away from the EPCOT entrance wearing a white tie-front sleeveless top. She says, “Guys, it happened. I got dress coded at Disney, and I was told to leave or get a shirt, so now we’re getting a shirt.”

In the comments, DeLosReyes clarifies that she wasn’t looking for a freebie and wasn’t even offered one. She wrote, “at entry i got stopped and was told they don’t allow tie front tops…wack. so i had to either leave and change or buy merch.” DeLosReyes later confirmed that she went back to her hotel, changed, and had a great time at EPCOT.

Another TikTok from late May confirms the change. @erinbill678 wore a tie-neck top to Walt Disney World and was told she must change, but not offered any freebies.

The Cast Member reportedly told Erin that any top that can become untied isn’t allowed. Erin expressed confusion since ties are not explicitly mentioned in the Walt Disney World dress code, which reads:

Walt Disney World keeps their definition of “inappropriate” vague, so it’s up to the discretion of the Cast Members at Park entry to decide if clothing confirms to the dress code requirements.