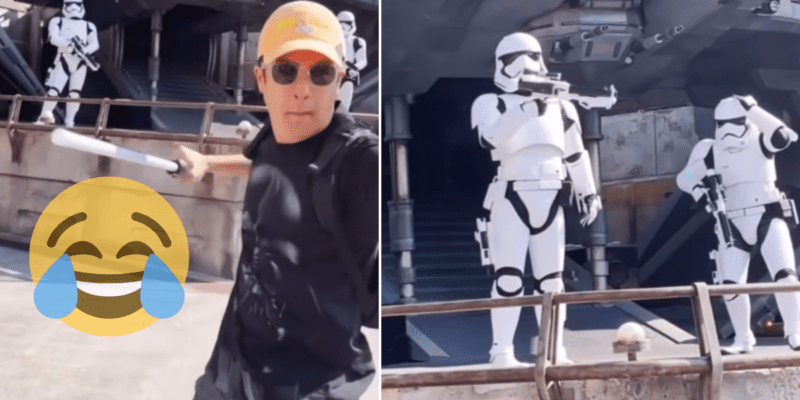 Walt Disney World Resort Cast Members will stop at nothing to make a magical memory for Disney Park Guests, even in the Florida heat!

At Disney’s Hollywood Studios, a couple of Stormtroopers took time out of their patrol last year to hilariously mock a lightsaber-wielding Guest.

Reddit user u/Sserenitynoww re-shared the video of a Guest swinging a lightsaber in front of some Stormtroopers:

Storm Troopers or Trollers!? from WaltDisneyWorld

One of the Stormtroopers sarcastically whips their gun around and waves, mocking the Guest. The other Stormtrooper jokingly backs away as if they are afraid of the other’s moves.

Walt Disney World fans were excited to see this video making the rounds again, applauding the Cast Members for their spontaneous ingenuity.

Related: Stormtroopers Steal and Convert Young Child While On Ship

“Every time I see CM’s nailing it, in likely 95+ degree heat I smile. I couldn’t do it,” Reddit user u/kenazo wrote.

Another fan said that the two Stormtroopers are “a national treasure.”

“Yeah this is the best thing i’ve seen on this sub this year,” u/stunna006 wrote.

Watch your back in Star Wars: Galaxy’s Edge at Disney’s Hollywood Studios and Disneyland Park! Stormtroopers roam the planet Batuu, looking for members of the resistance. From Star Wars:

Stormtroopers are elite shock troops fanatically loyal to the Empire and impossible to sway from the Imperial cause. They wear imposing white armor, which offers a wide range of survival equipment and temperature controls to allow the soldiers to survive in almost any environment. Stormtroopers wield blaster rifles and pistols with great skill, and attack in hordes to overwhelm their enemies. Along with standard stormtroopers, the Empire has organized several specialized units, including snowtroopers and scout troopers.

Have you had memorable interactions with Stormtroopers at Walt Disney World or Disneyland Resort? Share your experience with us in the comments!