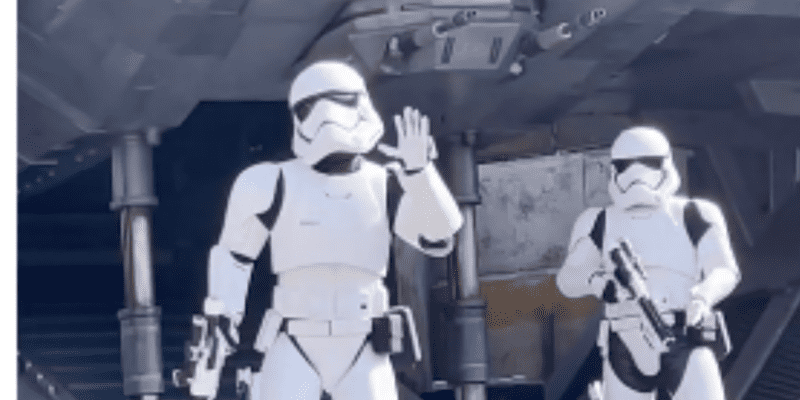 When a Guest enters a Disney Park, they are engulfed in a unique and surreal atmosphere unlike anywhere else.

Guests are able to meet with characters who play their roles very well and sometimes, this leads to hilarious interactions.

TikTok user @realmousevibes posted a video of an interaction they had with Stormtroopers at Disney’s Hollywood Studios.

In the above video, the TikTok user can be seen practicing his Jedi skills with a lightsaber but the stormtroopers aren’t impressed one bit.

One stormtrooper twirls his blaster in the same motions and the trooper besides him pretends to be bumped. Even though the stormtroopers don’t have facial expressions, they do an excellent job getting their point across and joking with the Guests.

In addition to the immersive Star Wars: Galaxy’s Edge at the Park, Disney is also taking reservations for its new luxury-themed two-night Resort.

As the airlock slides open, your whole world changes.

Step off the launch pod and into your own epic Star Wars story, one where you decide your fate. While your story unfolds, you’ll have the power to choose your path. Will you follow the rule of the First Order or join the Resistance in a secret plot? Strike a bargain with a gang of smugglers or sit back, sip a cocktail and watch it all from a safe distance?

The choice is yours. You are the hero of your very own Star Wars adventure—the most immersive Star Wars experience ever created!

While your choices determine what happens during your Star Wars: Galactic Starcruiser adventure, you’ll find something for everyone, including highlights like:

Whatever level of Star Wars fandom you claim, there’s no doubt that the attention to detail and completely immersive nature of these creations– from the characters to the rides to the food to the decorations and more– will blow you away.

What’s your favorite part of Star Wars: Galaxy’s Edge? Let us know in the comments.