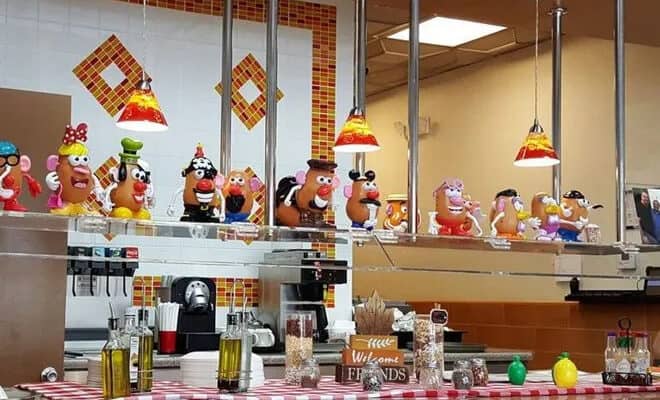 An Orlando, Florida restaurant manager had a whirlwind day at work on New Year’s Day 2022. Flaviane Carvalho, the manager of Potato Head-themed Mrs. Potato Restaurant — which is a 20-minute drive from Walt Disney World Resort — noticed signs of physical abuse on a young customer, who turned out to be the 11-year-old stepson of 36-year-old Timothy Lee Wilson.

Carvalho wasted no time in providing assistance to the victim. As People Magazine noted:

…[the manager] noticed the boy was bruised, scraped and malnourished, and also that he was seated “secluded” from his parents and his sibling. She also noticed he was the only member of the family without a meal or beverage.

“When Ms. Carvalho noticed injuries on the victim, she signaled to identify whether he was in need of help by holding up a sign out of the sight of Mr. Wilson, and he acknowledged that he did,” reads the statement.

…[it] revealed that “the victim was kept in a separate hotel room used for storage, away from Mr. Wilson, the victim’s mother, and the younger sibling,” according to the statement.

Duct tape covered the peep hole to the boy’s room, the statement indicates.

“He routinely was deprived of food and beverages, was made to do military-style exercises, hung upside down from a door by his neck and feet, and at one point, handcuffed to a dolly cart on Christmas Day,” the statement reads. “Officers recovered multiple items used as weapons — a bent metal pole, a wooden broom, a dolly cart, handcuffs, and ratchet straps used to tie the victim up.”

The jury in Wilson’s trial returned after just two hours of deliberation, finding him guilty on all 10 counts. Orlando WESH 2 News shared that he will be sentenced in Orange County, Florida on August 19, 2022.

The outlet also shared that the victim’s mother, Kristen Swann, 32, is facing two counts of felony child abuse after admitting that she was aware of the situation and did nothing to help her son.

Carvalho, who told WESH she was “used like a tool from God,” has been hailed as a hero. The National Heroes Day Twitter posted:

Flaviane Carvalho, a manager/server at a restaurant in Orlando, FL, saved an 11 year-old boy with two simple notes. Read the handful of words she wrote that saved his life: http://bit.ly/2u7ziMk #WhosYourHero #NationalHeroesDay (Photo: Sam Thomas/Orlando Sentinel)

The Mrs. Potato Restaurant — and its extensive collection of Hasbro Potato Head toys — was previously featured on Guy Fieri’s Diners, Drive-Ins, and Dives, and has been voted one of the top 12 restaurants in Orlando.

More on Potato Head and Disney

Mr. Potato Head (often referred to as simply Potato Head or Potato) is a supporting character in the Disney•Pixar Toy Story franchise. He is a Brooklyn-accented toy based on the Hasbro and Playskool doll of the same name.

In the original story pitch for Toy Story, he had largely the same personality as the final film, with his cynicism also being highlighted by his remarking, regarding Buzz potentially falling into the street (after Woody pushed Buzz out of the window, deliberately in this version) that “[Buzz] ain’t going to Pizza [Planet] now!” He was also shown to be very defensive of his fellow toys, as evidenced by his telling Woody, after the latter viciously insulted Slinky Dog and threatened to throw him off the bed for not willing to obey him in throwing them off the bed, that he might as well throw him off as well, with Hamm, and Rex joining in.

His wife, Mrs. Potato Head is described as:

In the third film, her role was expanded upon, becoming a pivotal character. With her eye missing while away at Sunnyside Daycare, Mrs. Potato Head is able to see Andy and come to the realization that he did not mean for them to be “thrown” away. As such, this realization motivates the toys to return to Andy’s, and leads them to become the new toys of Bonnie Anderson.

What do you think about Flaviane Carvalho’s brave act?