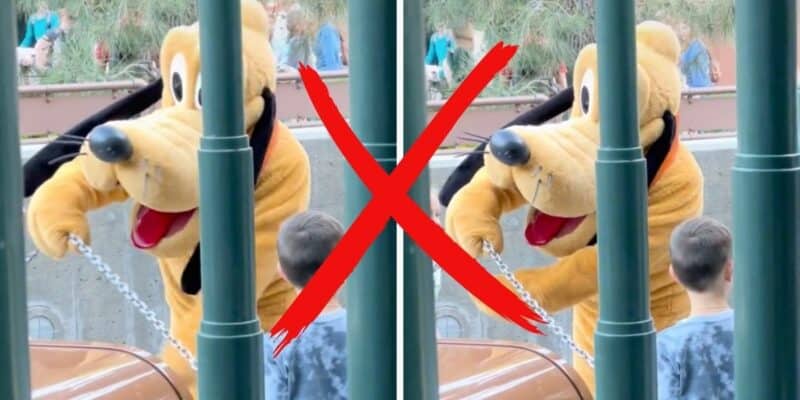 When Disney World reopened in July 2020, they brought along some reimagined ways for Guests to spot characters, including on pop-up cavalcades at the theme parks and other surprise appearances of characters frolicking around, such as Joy and Pooh in the fields at EPCOT or Pooh and friends at Crystal Palace in Magic Kingdom. The same went for when Disneyland Resort opened in April 2021.

However, as the world continues to fight the ongoing pandemic, Disney is continuously making changes and updates to its protocols at the Parks. One of the most recent changes was that character hugs and autographs officially returned to Walt Disney World and Disneyland, which has many Guests excited.

Guests can also catch various characters roaming around the Parks waiting to give out warm hugs and autographs.

Over at Disneyland, a family was so eager to meet Pluto that the children broke the rules as they pushed past the barricades. The worst part was that the parents allowed them to do so.

Pluto witnessed the incident and decided to take things into his own hands, kicking the Guests out and punishing them for their rude and uncalled for behavior.

The incident was caught on video and shared to social media by TikTok user daniel.padilla5. You can see the video below.

Related: First Disney Character Meet and Greet In 3 Years Does NOT Go As Planned

Please remember that Disney has rules and regulations in place for the safety of both the Guests and Cast Members. If a Guest is caught breaking the rules, they may be subject to leave the Park.