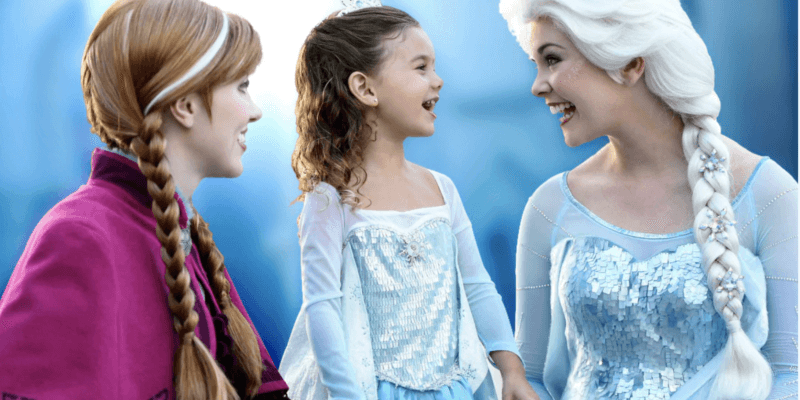 Character hugs and autographs recently returned to Walt Disney World and Disneyland, which had many Guests excited, but one character meet and greet didn’t go exactly as planned.

When Disney World reopened in July 2020, they brought along some reimagined ways for Guests to spot characters, including on pop-up cavalcades at the theme parks and other surprise appearances of characters frolicking around, such as Joy and Pooh in the fields at EPCOT or Pooh and friends at Crystal Palace in Magic Kingdom. The same went for when Disneyland Resort opened in April 2021.

However, as the world fights the ongoing pandemic, Disney brought socially distanced meet and greets and socially distanced character dining back to the Parks. But April 18 marked another big day for Disney Guests as you can once again hug Mickey Mouse and friends because Disney is doing away with the social distancing.

That’s right, on April 18, Disney World and Disneyland officially dropped the social distancing at character dining and meet and greets and Guests can once again hug Disney characters!

One family decided to visit Elsa and Anna from Disney’s animated film, Frozen, for the first time in three years, however, things did not exactly go as planned.

TikTok user and Disney Guest, magicfamclub, shared a video of their children going to meet Elsa and Anna for the first time in years. They were expecting tears, hugs, and magical moments — except that’s not exactly what happened.

In the video, you can see Elsa and Anna were expecting to hug the girls, but the girls were a bit shy and left the Arendelle Queens hanging. The TikTok user captioned the video “Didn’t go as planned” and wrote “First character meet and greet in 3 years didn’t go as planned”.

Although the Arendelle Queens did not receive hugs from these two Disney Guests, at least the interaction still made for a funny memory for the parents!

Have you experienced a character meet and greet now that hugs and autographs are back? Let us know in the comments below.

If you want to visit Disneyland on your next family vacation to experience Disneyland Park or Disney California Adventure but aren’t sure where to begin planning, don’t hesitate to reach out to our friends over at the Authorized Disney Vacation Planners at Academy Travel for a free quote.