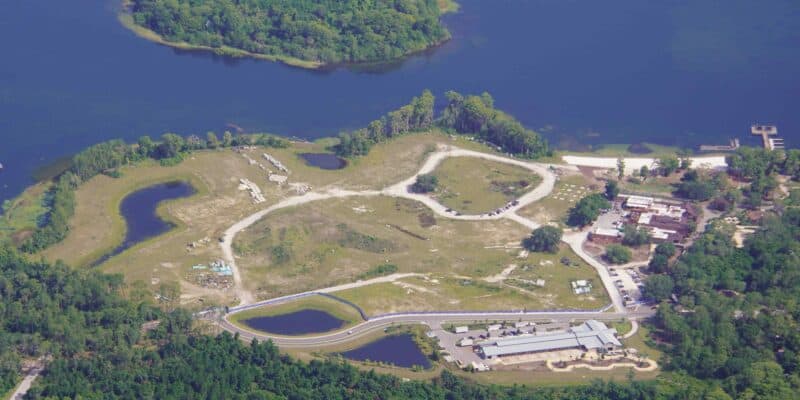 Guests visiting Disney World will always find something new to enjoy. From exciting new lands like Star Wars: Galaxy’s Edge and Avengers Campus to incredible new rides and attractions such as Guardians of the Galaxy: Cosmic Rewind, the Disney World experience is constantly changing and evolving.

The additions don’t stop at the Parks though, with Disney continually updating its many Resorts and hotels at the Orlando property.

Related: Guests Ushered Backstage, Given Water After Getting Stuck On Splash Mountain

One of the biggest projects currently is the expansion of Disney’s Polynesian Village Resort. This hotel is a legend in the collection of Disney World hotels and has become a fan favorite over the years.

Another big project is Disney’s Reflections: A Disney Lakeside Lodge, but the fate of this hotel is quite different than that of the Polynesian.

Aerial look at site of what was planned as Reflections: A Disney Lakeside Lodge. At right, Hoop-de-doo Musical Revue resumes in a few days. June 23. Bottom right is Tri-Circle-D Ranch. Two years ago the island at top was rated as a “Tropical paradise”.

Aerial look at site of what was planned as Reflections: A Disney Lakeside Lodge.
At right, Hoop-de-doo Musical Revue resumes in a few days. June 23.
Bottom right is Tri-Circle-D Ranch.

Two years ago the island at top was rated as a "Tropical paradise". pic.twitter.com/fnNMv4g1gv

The previously-announced Disney Resort was planned to be built on the same land as the old River Country water park which closed decades ago. The proposed Resort was also set to have a The Princess and the Frog-themed restaurant, which would tie in nicely to the eventual Splash Mountain overhaul.

Before the pandemic hit, work on Reflections had already begun, however, in more recent months, rumors began circulating that Disney pulled the plug on the project. In case you missed it, Reflections — A Disney Lakeside Lodge was removed from Disney’s press releases despite the company not having made a formal announcement that there may have been a change in plans. Though, again, nothing has been confirmed at this time.

It looks like there hasn’t been any movement on the project in quite a while, possibly indicating the rumors of its cancellation could be true. However, please keep in mind that at the time of publication, Disney has not made an official announcement regarding canceling Reflections — A Disney Lakeside Lodge.

Interestingly, in an official Disney YouTube video uploaded to its channel, we noticed that Disney showcased the new DVC tower that is being built on the opposite coast, in Disneyland. However, the interesting part is the fact that this video had no mention of Reflections.

Would you stay at this proposed hotel?