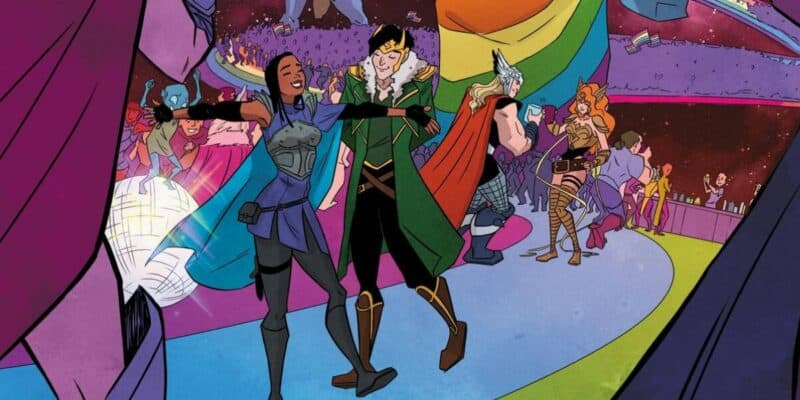 “Hot off a GLAAD Award nomination for 2021’s anthology, MARVEL’S VOICES: PRIDE returns for a jam-packed celebration of LGBTQI+ characters and creators! New York Times-bestselling, multi-award-winning author Charlie Jane Anders introduces a new hero to the Marvel Universe – and it won’t be the last you see of them. Get in on the ground floor here! IRON MAN scribe and lauded TV showrunner Christopher Cantwell takes on Moondragon’s complex legacy for a heart-bending story across space and time. Shuster and Eisner-winning writer Andrew Wheeler makes his Marvel debut with the MU’s real god of love – Hercules! Nebula, World Fantasy, and Locus-award winner Alyssa Wong reunites the Young Avengers in a story guaranteed to please fans new and old! And that’s just the first slice of the rainbow. MARVEL’S VOICES continues its groundbreaking anthology series with another swoon-worthy glimpse of the world outside your window!”

Marvel’s Voices: Pride will also introduce a brand-new transgender mutant. And Marvel has been teasing her first appearance in the anthology, which focuses on stories featuring LGBTQIA+ characters and creators. Marvel describes Escapade as:

“Escapade, whose real name is Shela Sexton, is a trans mutant who can instantaneously switch physical locations with another person or trade any specific physical or abstract attribute such as possessions, organizational status, skills, superhuman powers, and even situations! Escapade is only able to maintain the power for a few hours at a time a time and must be within seven feet of her target, and the more complex the switch, the higher the chance of a mishap.

Luckily for Escapade, she has an invaluable partner at her side, her tech-savvy best friend Morgan Red, along with a tool belt containing an arsenal of stolen tools and devices. Together, Escapade and Morgan tear through the Marvel Universe as professional thieves, stealing from criminal and corrupt organizations…until a meeting with Emma Frost and Destiny changes the course of Escapade’s life forever.”

However, some Marvel fans are reluctant to get attached to Escapade for fear of never seeing the character again. She has been promised to return in New Mutants for a special story guest-written by Anders, but Marvel fans have been down this road before.

The first transgender mutant who laid the groundwork for Escapade is Jessie Drake, who first appeared in Marvel Comics Presents #150 and #151 (1994) by Ann Nocenti and Steve Lightle. Jessie became Marvel’s first confirmed transgender character when she came out to Typhoid Mary. Jessie has the mutant ability to “empathic morphing,” meaning she shape-shifts into people she spends time with.

Since her debut 28 years ago, she has only appeared one other time – in last year’s Marvel’s Voices: Pride (2021). She is not set to show up this year. So, for fans of Jessie Drake, introducing Escapade comes at the cost of developing Jessie Drake. Jonathan Loves X-Men said:

“And although I’m very excited to meet Escapade, it would be nice to see Marvel’s first trans mutant…literally in any book doing anything!”

And although I'm very excited to meet Escapade, it would be nice to see Marvel's first trans mutant…literally in any book doing anything! https://t.co/iBP9zn2Pp9 pic.twitter.com/dGKl0vuWPH

Carol Anne Talks Comics! Also pointed out the hypocrisy long before this recent announcement, but the fact remains that Marvel Comics does not feature transgender characters regularly:

“The way that both Marvel and DC are actually physically allergic to adding a transgender superhero to any of their major lines is more telling than anything they could possibly care to profess each June and I will continue to say so until that changes. Send tweet.”

The way that both Marvel and DC are actually physically allergic to adding a transgender superhero to any of their major lines is more telling than anything they could possibly care to profess each June and I will continue to say so until that changes. Send tweet.

Thus, Escapade has become an “I’ll believe it if I see it” character for the moment. All representation matters, but it matters more if that character impacts the Marvel Universe for years to come.

Let us know in the comments if you think fans should demand more than a couple of appearances by Escapade in Marvel Comics.