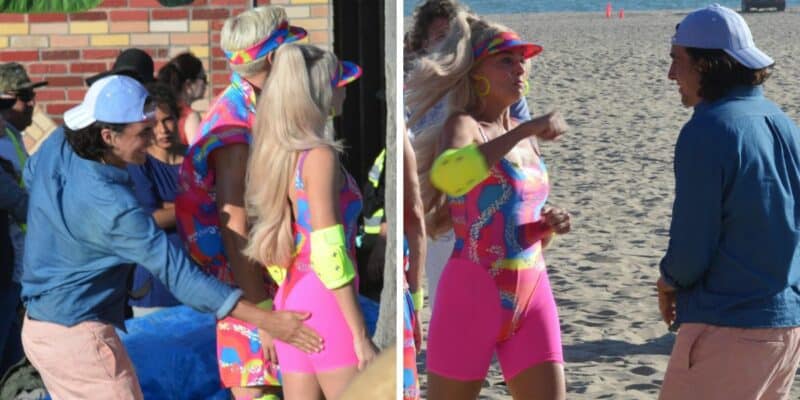 Margot Robbie (Suicide Squad) is reportedly the new Jack Sparrow of the Pirates of the Caribbean franchise, but that’s not all because she has a few other exciting projects lined up. Recently, it was announced she would be starring in an Ocean’s Eleven (2001) prequel, but fans are also looking forward to the upcoming Barbie (2023) movie.

Robbie is currently filming the Barbie film, alongside Ryan Gosling, who will be playing the role of Ken. Photos and videos have been leaked on social media over the last few days, but one scene is getting more attention than others as fans are now questioning if this is a children’s movie.

Spoilers for the upcoming Barbie film ahead.

Twitter account best of margot shared some photos, which show a scene of a guy coming up behind Barbie (Margot Robbie) and slapping her butt. Barbie quickly becomes angry and turns around and slaps the guy across the face:

Now we want to make it clear that this was clearly a scripted moment. Margot Robbie was seen acting out the punch as she clearly did not really punch the co-star and then she acted very shocked she did so afterwards.

Barbie is expected to hit theaters in July 2023 and features an all-star cast, including Margot Robbie, Ryan Gosling, Will Ferrell, Michael Cera, Kate McKinnon and more.

It is being directed by Lady Bird auteur Greta Gerwig.

Related: ‘Barbie’ Movie Could Delay ‘Pirates of the Caribbean 6’

Are you excited for the upcoming Barbie movie? Will you be going to theaters to watch it? Let us know in the comments below.