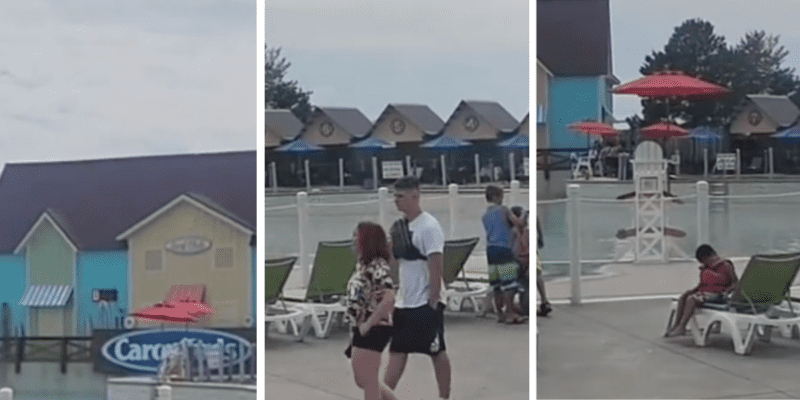 Rapper Machine Gun Kelly recently closed down an entire area of a popular theme park and forced Guests to leave.

Theme parks have offerings that range from thrilling attractions to world-class entertainment and much more. Whether you’re visiting a Disney Park— like Magic Kingdom or EPCOT in Walt Disney World Resort, or heading to Disneyland Resort– or another theme park across the country like Universal Orlando Resort, Universal Studios Hollywood, Six Flags, Busch Gardens, the all-new Lost Island Theme Park, SeaWorld, Cedar Fair, or any other property, you’re sure to have a fun time.

However, a recent trip to Carowinds in Charlotte, N.C. saw a strange and rare incident unfold for those visiting the water park portion of theme park.

As you can see, all Guests were allegedly forced to exit the wave pool, named Tidal Wave Bay, to make way for the celebrity.

Carowinds’ Carolina Harbor brings all the wonderful fun and excitement of the Atlantic Ocean to the inland with its ginormous-in-size, ginormous-in-fun Tidal Wave Bay. Holding 400,000 gallons of water, this state-of-the-art wave pool has enough room for everyone in the family to spread their flippers and catch some awesome waves. You’re in for a great time.

Little rafters can take it easy in the zero-drop entrance of the pool, where waves are mere ripples, but still loads of fun. What’s more, Tidal Wave Bay is surrounded by lounge chairs and cabanas, so chilling out by the pool is always an option. Whatever your need for fun in the Carolina sun, Tidal Wave Bay has you covered.

Disney Park Guests saw a similar situation at Disneyland Park recently when the Kardashians took over Disney attractions and forced them to remain closed until they had finished.

What do you think of this incident at Carowinds? Let us know in the comments!