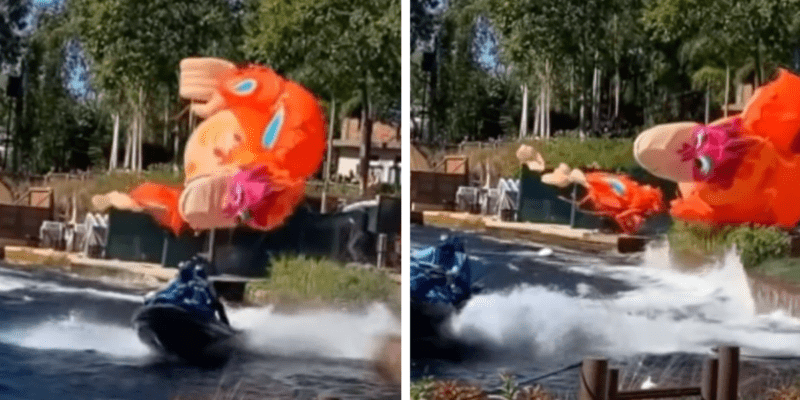 KiteTails was called a “total meme” when it premiered in 2021 at the former site of the Rivers of Light nighttime show; many Disney Parks fans felt it was half-hearted and not thoroughly thought-out. One Disney fan said it was the “most disturbing thing” she’d ever seen.

TikTok user @everythingdisney133 shared a brief clip from the show, in which a kite depicting King Louie from Disney’s The Jungle Book (1967) gets caught on a green structure on the edge of the Discovery River arena at Disney’s Animal Kingdom. His arm gets torn off, and his fingers are shredded:

Crash landings are par for the course at KiteTails – Walt Disney World even added a warning last year to let Disney Park Guests know that it’s normal for the oversized character kites to hit the water or the stands depending on wind conditions.

Of course, this level of damage isn’t normal. But Walt Disney World Resort fans shouldn’t worry: the video is reportedly old and the damage will not affect current performances of KiteTails, which was shortened and removed from the regular Disney’s Animal Kingdom entertainment schedule last month.

KiteTails debuted in 2021 as part of the 50th Anniversary Celebration at Walt Disney World. Located on the Discovery River in DinoLand U.S.A., it features characters from The Lion King (1994) The Jungle Book (1967), Finding Nemo (2003), The Little Mermaid (1989), and more. From Disney:

Watch as favorite Disney characters take to the sky for an all-new performance during The World’s Most Magical Celebration!

Have you seen Kite Tails at Disney’s Animal Kingdom? What did you think?