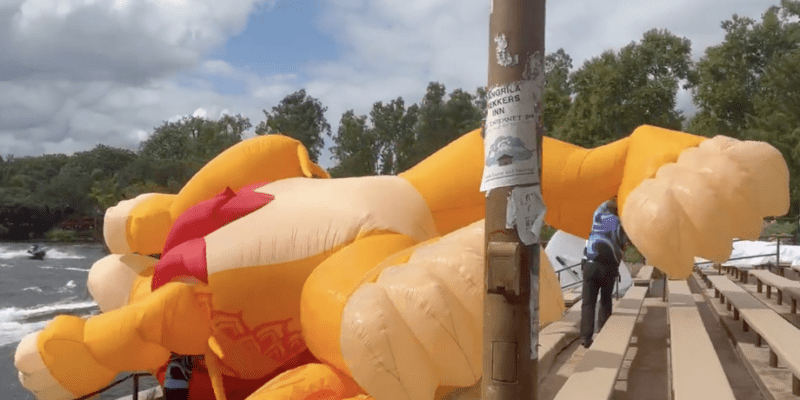 Have you ever heard the old saying, “if you can’t beat em’, join em’?” Well, it seems that Disney sure has, and they are implementing it on one of their newest shows.

Disney KiteTails is one of the shows that Disney added for the 50th anniversary celebrations at Disney’s Animal Kingdom. KiteTails takes place over the water stage at the theme park and has jet skiers attached to massive parade-sized floats as they let them fly through the air. There are a couple of renditions of the show, which are all incredibly fun to watch, but some have preferred to watch the kites land rather than soar.

Many have not been able to stop talking about how the KiteTails show has crash landings on a section of the Guest seating (and sometimes in the water) where we see giant Simba or Baloo come flying in. The landings do not look very clean, so for a while, many were wondering if that was always the intention for the show. As it continued to happen on each show, it became the new normal, and just yesterday, Disney ensured that Guests knew what was going on.

The greeting for the show now allows Guests to hear that all of the crash landings are meant to happen and are actually “part of the fun” of the show!

As you all know, what goes up must come down. So you will see them landing in plain sight, both in the water and in the designated landing zone in the adjacent seating area. If they take a tumble, don’t worry! That’s all part of the fun.

So, it seems that the kites are intended to “take a tumble” while the show is going on and that Guests should enjoy the joyful chaos while they watch!

Taking Magic to New Heights
Hearts and imaginations will soar as elaborate, 3-dimensional kites and incredible windcatchers dance through the air to the beat of beloved Disney songs during this high-flying performance at Disney’s Animal Kingdom theme park. Be awed by 2 unique, 10-minute shows:

Are you a fan of Disney KiteTails? Do you like the crazy crash landings?