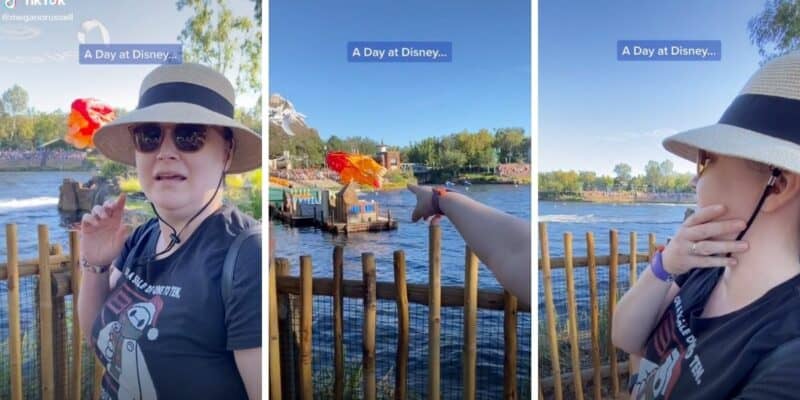 All Images: Credit Screenshot via @meganorussell

Guests have taken to social media to share various videos of the daytime show as throughout Disney KiteTails, kites crash land into the stands, which Disney now says is supposed to happen and is “all part of the fun”.

Well, one Disney World Guest witnessed Disney KiteTails for the first time recently, and it’s safe to say she was pretty shocked by the crash landings of the kites.

The TikTok video, which you can view below or by clicking here, shows the Guest’s reaction as she witnesses Disney KiteTails for the first time.

The video begins by the Guest saying “I don’t… so that’s a lion kite, and that’s a lion corpse stretched out on the stairs”. She continues as the Simba kite crashes into the stairs, “And the big lion is dead”.

The Disney Guest goes on to describe the show as the “most disturbing thing” she’s ever seen at Disney World right before suggesting Disney take lessons from the Macy’s Day Parade.

She ends the video by saying, “This is not what dreams are made of. This is a nightmare.”

In case you have never seen Disney KiteTails, the Walt Disney World website describes the show as:

Hearts and imaginations will soar as elaborate, 3-dimensional kites and incredible windcatchers dance through the air to the beat of beloved Disney songs during this high-flying performance at Disney’s Animal Kingdom theme park. Be awed by 2 unique, 10-minute shows:

Watch as the magic takes flight above the Discovery River Theater during the 50th anniversary celebration of Walt Disney World Resort.

Have you ever seen Disney KiteTails? What do you think about the crash landings of the kites? Let us know in the comments below.