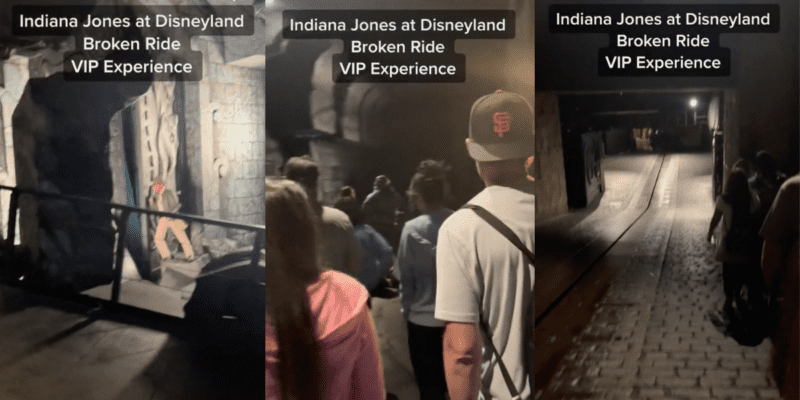 Disneyland Resort is The Happiest Place on Earth. Thousands of Guests visit Disneyland Park and Disney California Adventure every day and have a magical, memorable trip experiencing attractions, restaurants, and world-class entertainment.

With such a high volume of Guests and enhanced technology, it’s common for Disneyland rides to break down. Typically, Guests are only stuck on the ride for a minute or two before the ride restarts.

Sometimes though, Guests must be safely evacuated from rides so that more extensive malfunctions can be repaired. That was the case this week at Disneyland Park when Cast Members had to escort a group of Guests from Indiana Jones Adventure.

Related: Magic Kingdom Guests Forced to Exit Through Backstage Due to Massive Crowding

TikTok user @_onlygtm shared a video from the evacuation showing Indiana Jones Adventure with the lights on:

In the TikTok, Disney Park Guests get an exclusive look at motionless animatronics and ride vehicles, and walk down the brick roads of the cursed temple.

Indiana Jones Adventure began operating as normal soon after the breakdown and no one was injured during the evacuation. In fact, this Guest called it the “best tour ever!”

Have you ever been evacuated from a ride at Disneyland or Walt Disney World Resort? Let us know in the comments.