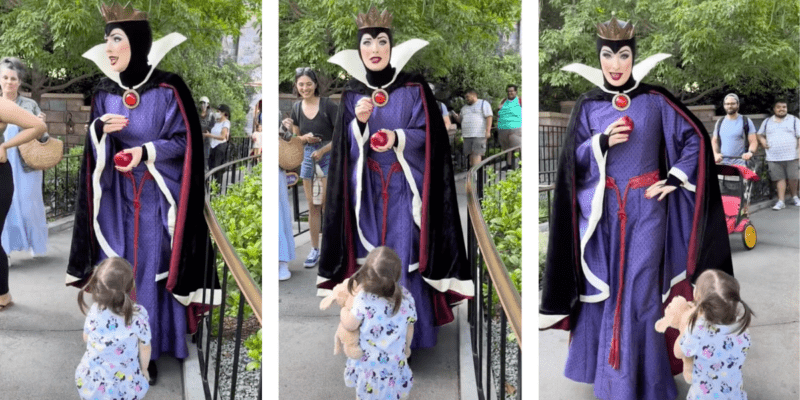 It can be overwhelming to meet your favorite Disney character, even as an adult!

For one tiny Disneyland Guest, meeting the Evil Queen from Snow White (1937) was just too much to bear.

“It’s like what Snow White does,” the Evil Queen says. “She gets it from her mom,” the dad jokes from behind the camera.

“Does she? Where is the mother right now? I’m afraid to ask,” the Evil Queen says, her famous poison apple in hand.

“How can the mother sleep with this running around the house?” the Evil Queen asks, pointing to the little girl who lets out another adorable scream.

“She had one of your apples,” the dad responds.

The Evil Queen asks the little girl if she wants a photo, and the video cuts to the pair getting ready to pose on a bridge together. The girl screams again, and another Cast Member comes to help fan the Evil Queen. She jokes that she can’t tell if it’s a scream of fright or delight!

Whether they were joyful or terrified screams, this is a magical Disneyland memory the little girl and the Evil Queen herself won’t soon forget!

Want more of the Evil Queen at Disneyland Resort? Check out Snow White’s Enchanted Wish, a new take on the classic Fantasyland dark ride that opened along with Disneyland on July 17, 1995.

Related: Gal Gadot Is the Next Evil Queen – But Fans Aren’t Sure About It

Formerly known as Snow White’s Scary Adventures, the ride has gone through its fair share of changes over the years, including outlasting its Magic Kingdom counterpart at Walt Disney World Resort! From Disney:

Embark on a magical ride into memorable scenes from Snow White and the Seven Dwarfs.

Have you met the Evil Queen at Disneyland? Did you get a bite of her poison apple?