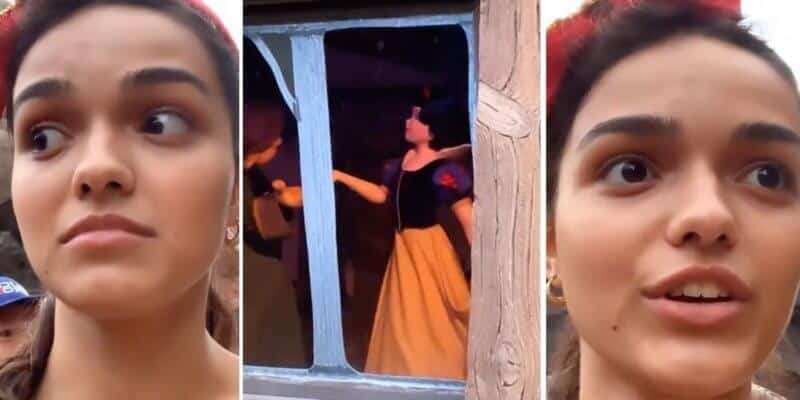 Have you ever wondered what it would be like when a celebrity who plays a live-action Disney character heads to the theme parks and sees themselves as an animatronic or character?

Lately, many Hollywood stars who are a part of the Disney family have been able to see themselves represented in the Disney Parks. One of the best examples of this is at Disneyland Resort. In Avengers Campus at Disney California Adventure, Guests can see all of their favorite Marvel Cinematic Universe characters come to life. They all look like the film characters Marvel has been developing for over 10 years.

When any actress who has played a live-action Disney Princess visits the park, they may not see a doppelganger of their face, but they surely will see the princess they played appear in a parade or cavalcade. Some may even see themselves as an animatronic!

Rachel Zegler has just recently been confirmed as the live-action Snow White and was recently visiting Disney World. Perhaps she was visiting to celebrate her role or do some research, but things sure did get odd for the actress when she saw Snow White dancing with the dwarfs after riding Seven Dwarfs Mine Train at Magic Kingdom at Walt Disney World Resort.

Rachel (@rachelzegler) took to Twitter to post a video of her at the tail end of the attraction. As she sees Snow White dancing, Rachel says, “it’s getting weird”.

Personally, I am not too surprised by this reaction! It must be a whirlwind to not only know you are playing an iconic Disney character but then to see that character represented on one of the most popular attractions at Disney World! I did love that Rachel was wearing Snow White’s iconic red bow in her hair while riding the attraction — clearly a homage to the princess herself.

Zegler will first be seen in her breakout role as Maria in Steven Spielberg’s new retelling of West Side Story. As for Snow White, production is expected to begin next year in 2022. Marc Webb will direct, with Marc Platt producing.

What do you think of Rachel Zegler playing Snow White?