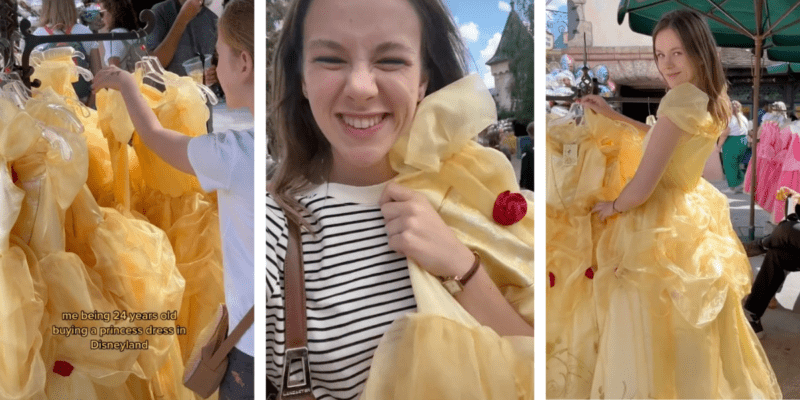 The Disney Parks dress code has been a hot topic lately, with a TikTok trend gaining traction in the last year that encouraged Guests to wear inappropriate clothing to any Disney Park to receive a free shirt.

This trend was so popular that Walt Disney World Resort appeared to change its policy and no longer allowed Cast Members to give free clothing to Guests in violation of the dress code.

Now, a different part of The Walt Disney Company’s dress code is gaining traction online. A 24-year-old at Disneyland Paris shared a video of herself purchasing and wearing a Beauty and the Beast (1991) Belle dress meant for children:

It was literally my dream! 😍 As a child I wanted so much to het this Bella Princess dress #disneyland #princessdiaries

Commenters were frustrated with @masha_in_paris, though she says she was living out a childhood dream and doesn’t regret it.

“You can’t actually [do this],” @xbofleur said.

“No. Belle dress/costume is an automatic not allowed. Disneybounding is totally cool/ permitted but that’s not what this is,” @Tbrake1313 said.

Despite the mean comments, most Disney fans said Masha looked beautiful and were just trying to remind her of the rules so that she didn’t get in trouble.

“I was fitting the same belle dress and a cast member got mad at me… this was literally 2 days ago, i was crying…” @elodieelisa said.

“I was told by a cast member that the only day adults are allowed dress up is Halloween 🎃,” @whatsername_xdxp wrote.

Though Disneyland Paris’ dress code doesn’t mention an age limit for costumes, the United States Disney Parks ban costumes on anyone over the age of 14, except at special events like Mickey’s Not So Scary Halloween Party at Magic Kingdom and Oogie Boogie Bash at Disneyland Park. Disneyland Paris does, however, ban “posing as or portraying any character in costume” if it “would impede the operation.”

Disneyland Paris’ dress code is much less detailed than that of Walt Disney World and Disneyland. However, it does mention costumes and that Disneyland Paris reserves the right to deny a Guest entry based on what they’re wearing. From Disney:

Proper dress is required at all times, and top and bottom garments, as well as footwear, are to be worn.

We also reserve the right, at our own discretion and at any given time, to refuse a visitor the right to wear any type of costume, makeup or tattoo, especially if it is likely to offend, shock or scare children and a family-orientated public, that Euro Disney Associés S.C.A. would consider as inappropriate or if it would impede the operation while posing as or portraying any character in costume. The same rule applies for accessories considered to breach security or be a danger in our attractions (capes, sticks, etc.).

For safety reasons, the only visitors authorized to wear a mask or clothing completely covering their face are those doing so for medical reasons.

The non-respect of this dressing code may deny access to the Parks.

Would you wear a princess dress at the Disney Parks if the dress code allowed? Let us know in the comments!