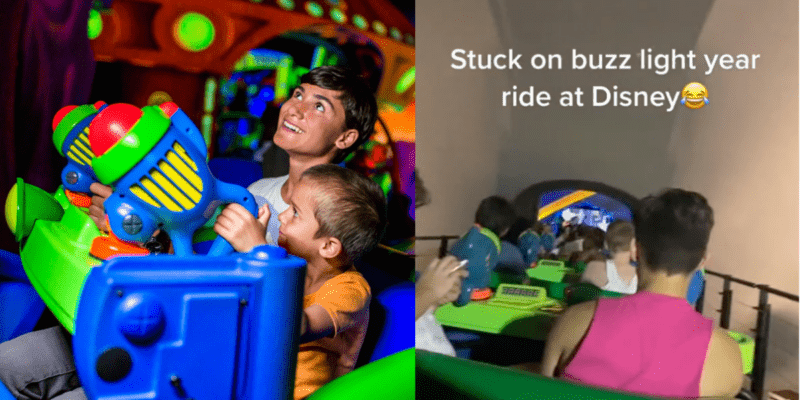 At Walt Disney World Resort, Guests can meet Buzz Lightyear himself in Tomorrowland at Magic Kingdom and in Toy Story Land at Disney’s Hollywood Studios! They also have the chance to experience Buzz’s unique attraction: Buzz Lightyear Space Ranger Spin.

This slow-moving dark ride, which opened in 1998, allows Guests to shoot lasers at space aliens, living inside their own space ranger adventure! It utilizes a mix of real practical props and screens to immerse Guests in Buzz’s world.

However, one recent Walt Disney World Guest had a less-than-magical experience aboard Buzz Lightyear Space Ranger Spin. TikTok user @mackeymcgowan shared a video of himself stuck on the ride after it broke down.

In the video, Guests get a rare glimpse of Buzz Lightyear Space Ranger Spin with the lights on, and all of the screens surrounding the ride vehicles are off. If you didn’t recognize the ride vehicle, you’d think the Guest was sitting in a plain white room!

Fire your laser to earn points and defeat the Evil Emperor Zurg as you journey through a galactic space battle.

What’s your high score on Buzz Lightyear Space Ranger Spin? Have you ever scored 999,999 to become a Galactic Hero?